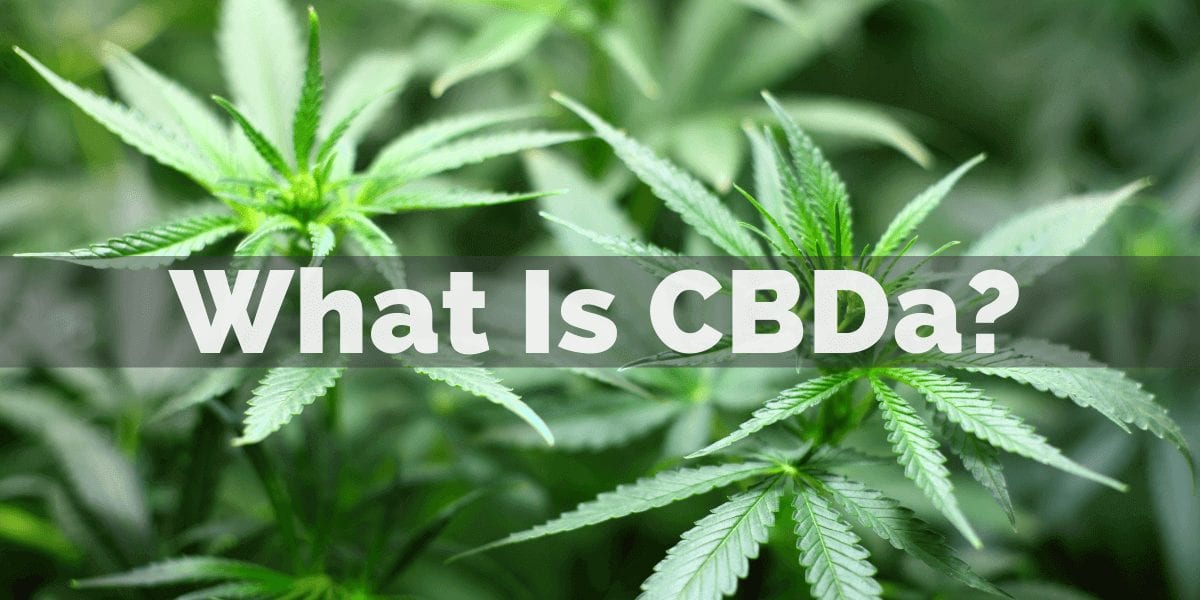 Table of Contents hide
CBDA (Cannabidiolic Acid)
What Is CBDA?
How To Decarboxylate CBDA?
CBDA Vs CBD
Is CBDA Better Than CBD?
Dog Pain Medicine
Is CBDA Considered a Good Substitute For NSAIDS?
Benefits of CBDA for Dogs
What Are the Therapeutic Effects Of CBDA?
Benefits Of CBDA Oil for Dogs
CBDA Products

While there’s mounting evidence of Cannabidiol (CBD) being an effective alternative therapy for canine conditions like separation anxiety, arthritis and cancer, it might be surprising to learn that the hemp plant actually contains very little CBD.

In its natural state, raw hemp is composed of 95% CBDA (Cannabidiolic Acid) and only about 5% is in the form of CBD (Cannabidiol). But what is CBDA and how can dogs benefit from this natural plant component?

When the hemp plant is processed, cannabinoids can be changed or removed. The final hemp product can contain a single cannabinoid molecule (CBD isolate) or all the available cannabinoids (full spectrum), depending on how it is manufactured.

Levels of cannabinoids will vary slightly between each crop as well as each individual plant—even those that are grown right next to one another will result in different amounts of cannabinoids.

Environmental factors such as light, heat and air can also affect which and how much of each cannabinoid is present in the plant ‘trichomes’ (resin glands) before final extraction.

Until recently, CBD has been viewed as the more important cannabinoid and manufacturers have intentionally converted CBDA into CBD to expose its diverse therapeutic benefits.

How To Decarboxylate CBDA?

Through a process called decarboxylation, the raw plant form of CBDA is heated and the acidic form is converted to CBD — a process known as “decarbing”. Decarboxylation is a chemical reaction where a carboxyl group (-COOH) is removed and carbon dioxide is released. In less rigid scientific terms, CBDA is ‘converted’ into CBD.

What is left is referred to as ‘activated’ CBD. Cannabinoids in their acidic form (CBDA) had previously been considered ‘inactive’.

Today, most commercially available CBD products are decarbed and contain little or no CBDA.

That’s unfortunate because science is now discovering that the acid-form of CBD, Cannabidiolic Acid, possesses significant medical benefits and healing qualities in its own right.

The effective combination of CBD+CBDA is why Canine Support Formula has been shown to reduce canine anxiety and improve mobility for dogs with painful arthritis and mobility issues.

Is CBDA Better Than CBD?

With so much emphasis being placed on the research and commercial development of CBD, little was known about the potential therapeutic benefits of its chemical precursor, Cannabididiolic Acid. Though quality research on CBDA is sparse, some scientists are looking into the therapeutic potential of this predominant cannabinoid and finding abundant health benefits to comfort and care for our canine companions.

CBDA (like CBD), is non-intoxicating & non-psychoactive so it won’t get your dog ‘high’ and doesn’t produce side-effects or negative symptoms associated with Canine Ataxia–a serious condition caused by a dog consuming too much THC.

According to current published research, many conditions that respond well to CBD may also respond to CBDA.

And thanks to its natural anti-inflammatory, antioxidant, analgesic effects, CBDA in hemp provides an array of medical applications to support dogs with cancer, epilepsy & pain associated with osteoarthritis, hip-dysplasia or degenerative-joint-disease (DJD).

Is CBDA Considered a Good Substitute For NSAIDS?

The efficacy of using CBDA as a substitute analgesic for non-steroidal-anti-inflammatory drugs (NSAIDS) shows immense promise for dogs with chronic pain.

While there have been no human or animal studies that examine CBDA as a treatment for arthritis or inflammatory conditions, laboratory research in cell cultures has discovered that CBDA seems to work in a remarkably similar way to common non-steroidal-anti-inflammatory-drugs like Aspirin, Ibuprofen and Acetaminophen–but without the increased risks of peptic ulceration or kidney damage associated with the use of NSAIDS.

Studies suggest that CBDA may NOT interact with the endocannabinoid system (ECS); but rather, CBDA affects other non-endocannabinoid receptors and enzymes. Researchers speculate that the analgesic, anti-inflammatory effects of CBDA are based on the way it interacts with an enzyme called COX-2.

There are two types of cyclooxygenases (COX-2) enzymes, COX-1 and COX-2.

Both enzymes produce prostaglandins that promote inflammation, pain, and fever but it’s the COX-2 enzyme that is the primary target site for anti-inflammatory drugs and the recent focal point of research into CBDA as a preferable pain-management therapy.

While NSAIDs block the COX-2 enzymes and reduce production of pro-inflammatory prostaglandins, CBDA can also perform this chemical interference but do so without the negative side-effects associated with prescription drugs or over-the-counter medications (OTC).

Interestingly, the researchers found that CBDA seemed to affect the COX enzyme while other cannabinoids, like psychoactive THC, was a much less potent inhibitor of COX-2 enzyme.

Similarly, these lines of evidence suggest that naturally occurring CBDA in hemp is a selective inhibitor for COX-2 and worth further investigation as a natural pain relief alternative for dogs at risk of harmful side effects from NSAIDS.

Cannabidiolic Acid (CBDA) is a selective inhibitor for COX-2 and a potential natural treatment alternative for pain management where the use of NSAIDS may not be well tolerated.

Benefits of CBDA for Dogs

What Are the Therapeutic Effects Of CBDA?

While clinical research is still in its infancy regarding the potential therapeutic effects of Cannabidiolic Acid, CBDA from natural, full-spectrum hemp is thought to provide the following medicinal benefits:

Benefits Of CBDA Oil for Dogs

Dog owners who want to take a more natural, holistic approach to pet care are now considering CBDA from hemp to give their dogs with joint pain and mobility issues a better life.

Hemp (a variety of Cannabis Sativa) is unique in the plant kingdom due to its ability to produce cannabinoids like cannabidiolic acid (CBDA), as well as the more illustrious compounds cannabidiol (CBD) and tetrahydrocannabinol (THC).

These phytonutrient compounds offer a safe and effective healing alternative to OTC and pharmaceutical medicines to relieve pain without the negative side effects of drugs.

While CBD (the non-acidic form of cannabidiol) has received a great deal of attention and praise for its ability to positively affect the health and well-being of our dogs, more research is necessary to learn if CBDA can offer better relief for chronic pain or neurological disorders in dogs than currently available prescription or OTC medications.

If you’re looking for an all-natural way to reduce pain and inflammation, without adverse drug side-effects, then Cannabidiolic Acid (CBDA) from unprocessed (non-decarbed) hemp may be just what you’re seeking to comfort your ailing pet.