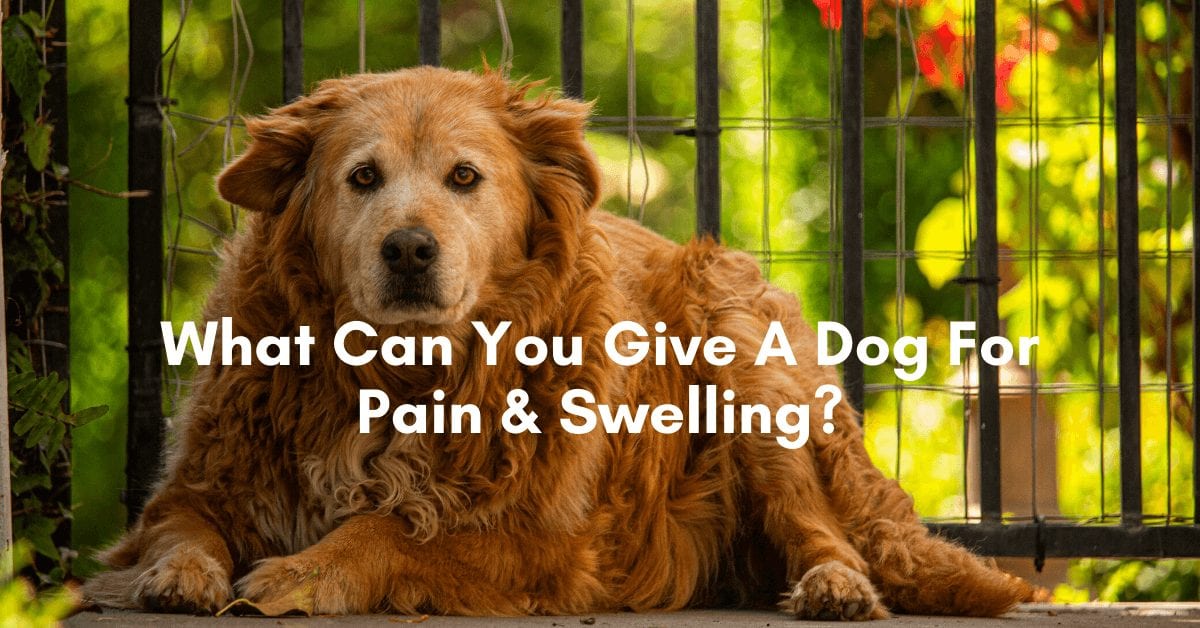 What Can You Give a Dog for Pain and Swelling?

No one likes to see their four-legged friend in any kind of distress, so it can be heartbreaking when your dog is visibly in pain.

Worse still, dogs are notorious for hiding pain. Meaning that by the time a loving pet parent is finally able to detect their pup’s discomfort, their canine friend has probably already been hurting pretty badly.

There’s nothing worse than seeing your canine companion in pain, which is why pet owners are quick to resort to pharmaceutical or OTC solutions to prevent their dog’s suffering.

However, there is an abundance of evidence that the natural anti-inflammatory properties of CBD (Cannabidiol) can help reduce pain and swelling in our K9 companions.

What Can You Give a Dog for Inflammation

Whether your dog suffers from painful arthritic joints, inflammatory bowel disease (IBS) or aged-related soreness, you need to know the importance of finding a safe and effective treatment for their inflammation.

Cannabidiol (CBD) is one of the main pharmacologically active Phyto cannabinoids of Cannabis sativa L. that exerts a number of beneficial pharmacological effects, including anti-inflammatory and antioxidant properties.

Inflammation is the body’s immune response against foreign substances, injuries or infection. It can also result from autoimmune diseases, in which the body triggers an inflammatory response when there aren’t any foreign invaders to battle.

Dog inflammation is a complex biological response of the dog’s body tissues to harmful stimuli, such as pathogens, damaged cells, or irritants, and is a normal protective response involving immune cells, blood vessels, and molecular mediators to repair the body.

During an inflammatory response, chemicals are released into the tissue or blood to fight infection to do other jobs. Inflammation occurs when plasma and white blood cells are drawn to a part of the body to fight infection, take away dead cells and initiate tissue repair.

This increase in blood flow to the area causes the region to appear reddened and feel warm. The blood vessels become more permeable, and leak fluid into the surrounding tissue, causing swelling.

But inflammation comes with a price: increased pressure from swelling (along with the release of certain chemicals such as bradykinin and histamine), cause increased blood flow and stimulate pressure-sensitive nerve endings to become irritated and painful.

Anytime you see inflammation, expect that your dog is in pain.

Inflammation can occur all over the body, from noticeable areas like joints (arthritis), skin (dermatitis), mouth and eyes (conjunctivitis), to less obvious inflammation of internal organs, including the heart (myocarditis) and the brain.

The Downside of Inflammation for Dogs

While inflammation is a helpful process combating injuries and infectious invaders, chronic inflammation can also be harmful as it can cause debilitating pain and even increase the chances of some diseases.

Research has shown that inflammation plays a role in turning on certain genes that predispose an animal to critical disease processes, including lymphoma and cancer.

Unfortunately, many, if not most, instances of inflammation may go unnoticed. A virus may enter the gastrointestinal tract and trigger an immune response and inflammatory process. Non-food objects (and what dog doesn’t eat a twig or an occasional illicit snack from the trash?) and even some foods can produce pro-inflammatory molecules.

Although we know less about the specific role of inflammation in the dog’s body, it’s reasonable to assume it has the same disease proliferation effects on their health as in humans.

What we do know is that inflammation is the most common source of aches and pains for all dog breeds, of all ages!

Due to the risks of common Non-Steroidal Anti-Inflammatory Drugs for dogs, pet owners are looking into natural anti-inflammatory options for their dogs.

For pet parents who prefer a more natural, holistic approach to managing their dog’s pain and inflammation, CBD oil from hemp is proven to be an effective anti-inflammatory replacement for traditional prescription NSAID medications.

Phenomenal supplement! Has significantly helped calm my anxiety ridden dog & eased the pain in my senior dog with multiple joint/leg issues. I have tried similar products in the past, without gaining any notable results. K9 Medibles uses high quality ingredients, well balanced concentration of CBD & has created an amazing, effective product that will benefit SO many!!

Phyto cannabinoids found in hemp modulate inflammatory responses by regulating the production of cytokines in the blood and do so with no known cytotoxic effects.

In other words, CBD worked to reduce pain and swelling at the cellular level but without the negative side effects often found with OTC and prescription NSAID medications.

The hemp plant also contains other compounds such as terpenoids, whose biological effects have yet to be fully elucidated; but evidence is mounting for plant terpenes such as beta-Caryophyllene to hold promise as powerful anti-inflammatory agents as well!

Renowned as the first-ever “dietary cannabinoid” for over a decade now, β-caryophyllene may not be as well-known as other cannabis terpenes; but you would know it if you tasted it. Born from a combination of iso- caryophyllene and α-humulene, it is known for giving strains their distinct ‘peppery aroma’. This peppery terpene has been investigated for its ability to treat neuropathic pain & inflammation.

Therapeutically, β–Caryophyllene is a common constituent of the essential oils of numerous spice and food plants and is the only known terpene that interacts with the body’s endocannabinoid system to produce anti-inflammatory, analgesic effects by selectively binding to the CB2 receptor and is a functional CB2 agonist.

Besides its analgesic and anxiolytic properties, some studies have found that when used in a combination with full spectrum hemp extracts (CBD+CBDA), terpenes exert prolonged immunosuppression and might be used in chronic inflammation conditions; while terpenoids showed only a transient immunosuppression effect and therefore might therefore be used to relieve acute inflammation.

In essence, it’s the full complement of all of the primary cannabinoids in full spectrum hemp PLUS the array of natural terpene components that produce BOTH acute and chronic anti-inflammatory actions. Full spectrum CBD oil can safely alleviate many of the painful symptoms of inflammatory diseases in our canine companions.

Types Of Inflammatory Disease in Dogs:

Canine inflammatory conditions can be acute or chronic and range from mild to severe symptoms.

Arthritis is an especially common canine condition accompanied by inflammation. The joint becomes filled with extra cells and inflammatory substances, causing irritation, wearing down of the cartilage, swelling of the joint lining, stiffness, and pain. Some, but not all, types of arthritis are thought to be caused by inflammation that has been misdirected.

This is less the case in osteoarthritis, in which inflammation may occur in response to damage to the cartilage in the joint.

Asthma is a disease of inflammation caused by the actions of inflammatory cells such as mast cells, eosinophils, neutrophils, T- lymphocytes, epithelial cells, and macrophages. Inflammation of the airways produces the classic symptoms of asthma: coughing, wheezing, chest-tightening, and difficulty breathing.

Atopic Dermatitis is inflammation of the skin. Clinical signs can overlap with other diseases, so parasites, pruritic microbial overgrowth, food allergy, and flea allergy need to be excluded.

Inflammatory Bowel Disease (IBS) is inflammation of the stomach or intestinal lining inhibits normal digestion of food and can cause chronic vomiting, long-term diarrhea, weight loss and abdominal pain that may come and go. The underlying cause may be inflammation due to genetic, food allergies, parasites, bacteria or other reasons not yet understood.

Inflammatory Joint Disease is usually caused by an infection, such as bacterial or fungal infection, tick-borne disease, and Rocky Mountain spotted fever. This type of arthritis can also be caused by an underlying defect in your dog’s immune system, which may be hereditary.

Conjunctivitis is Inflammation of the conjunctiva of the dog’s eye is usually caused by irritants, allergies or dry eye.

Pancreatitis is inflammation of the pancreas causes intense pain, with the condition often recurring throughout the dog’s life. It’s most often seen in middle-age or older overweight dogs.

Panosteitis is the painful inflammation of the long bones is seen in young dogs, usually between 5 and 19 months of age. It affects the front legs more often, and the dog may find it too painful to play. The condition can last from days to months and can be mild or severe.

Uveitis is inflammation of the eye’s iris and muscles that control the lens can be very painful; it is most often immune-mediated but can be caused by a variety of factors.

What Can You Give a Dog in Pain?

If you’re thinking about taking an alternative approach to your dog’s pain and swelling in order to avoid the potential toxic side effects from long-term use of prescription NSAIDS or OTC medications like aspirin, talk to your veterinarian about natural anti-inflammatories like CBD from hemp.

Remember, maintaining a healthy lifestyle, with proper exercise, low stress, good nutrition and fit-dog-weight are all beneficial for dogs with inflammation to prevent the development of chronic, progressive inflammatory conditions.