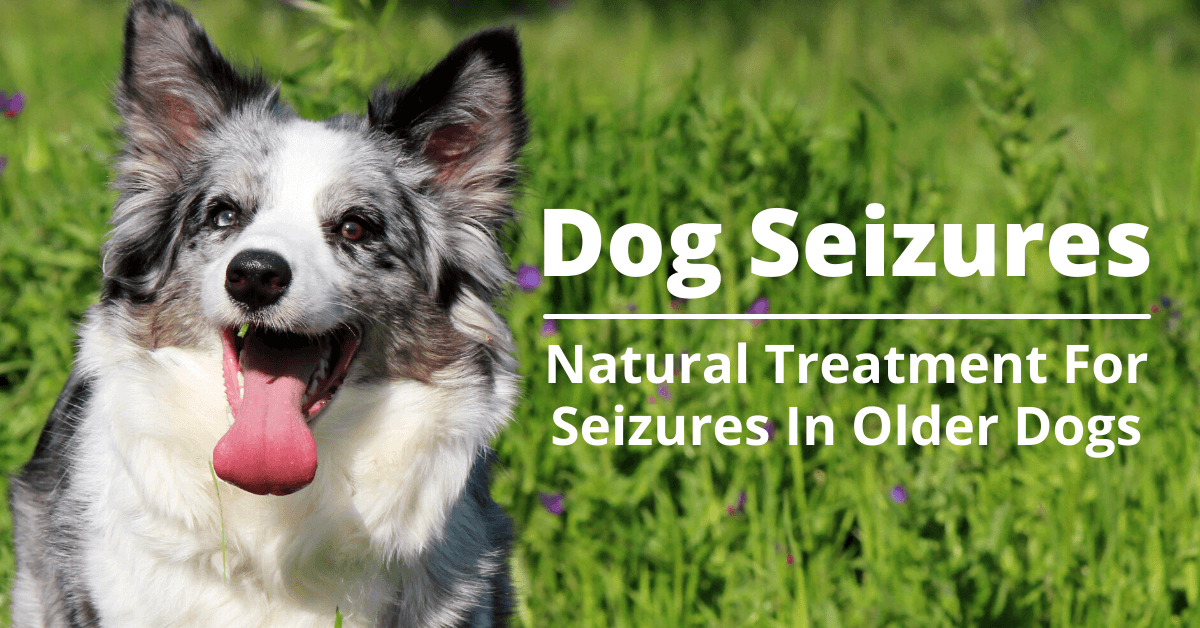 The simple truth is–seizures in older dogs can be very scary! While canine seizures can occur at any age, older dogs are at a higher risk of developing conditions that may result in uncontrolled seizure activity.

By knowing how to recognize the signs of a seizure, understanding what could be causing it, and how it is effectively treated, can help your aging dog live a long and happy life.

What Are Seizures in Dogs?

The medical definition of a seizure is an ‘involuntary, uncontrolled neurologic disturbance in the brain due to temporary abnormal electrical impulses’.

This abnormal electrical activity then causes a dog to lose complete control of all or certain parts of its body resulting in a variety of symptoms.

Seizures can come on very suddenly and vary in degree of severity and length, but they are all a result of something improperly working in the brain.

When these abnormal brain impulses reach their target in the body, they can cause atypical body movements like head tremors or jerking of the legs. They can also cause behavior changes ranging from lethargy to increased aggression.

The exact physical signs will be determined by the area of the brain where the abnormal electrical activity was centered.

When picturing seizures in older dogs, many dog parents imagine spastic, erratic movements and paddling of the limbs–However, not all seizures are this violent.

Some seizures are milder and won’t affect your dog’s entire body, while others can completely (but temporarily) debilitate your dog.

Seizures can sometimes manifest as odd or “strange behaviors” like staring off into space or biting at the air. Other times, there will seem to be no explanation for when a dog will fall over, lose consciousness, paddle its legs, twitch, vocalize, salivate, urinate, defecate, and arch its back.

Other signs of a seizure can include excessive licking of the lips and chewing, despite not having any food in its mouth, or just being unable to use one side of its body or a leg.

What Are the Signs of Seizures in Dogs?

There are periods of time before and after the actual seizure where you may notice your dog is not acting right–It’s important to recognize those as part of the total seizure event too.

Why Do Old Dogs Have Seizures?

In contrast to younger dogs, if an otherwise healthy senior dog starts having seizures, there is usually an underlying cause.

Younger dogs, on the other hand, are more likely to be diagnosed with Idiopathic Epilepsy–where no cause can be found.

Senior dogs are more prone to kidney and liver disease. As either of those organs fail, toxins build up in their blood stream. When these toxins reach the brain, sudden onset seizures can occur.

Also, older dogs are more likely to have Diabetes Mellitus. If they become hypoglycemic (have low blood sugar), they may have sudden onset seizures.

Sudden onset seizures can be caused by benign or malignant tumors in the brain. Some tumors originate in the brain while others metastasize (spread) to the brain from cancer elsewhere in the brain of older dogs. Overall, brain tumors are more common in dogs over the age of five.

If you have a dog with sudden onset seizures, your veterinarian can run ‘differential tests’ to determine if the cause of seizures is a metabolic disease or presence of tumors.

Despite the use of traditional canine epilepsy drugs like Phenobarbital and Potassium bromide, many dogs’ seizures remain uncontrolled using currently available therapies.

Even with medication, up to 30 percent of dogs with epilepsy continue to experience uncontrolled seizures.

Many canine patients experience adverse side effects of anti-convulsive medications, including sedation, ataxia, and increased appetite and water consumption. Dogs can also develop tolerance to phenobarbital over time and are susceptible to withdrawal effects as physical dependence can develop.

Unfortunately, pet parents of severe seizure sufferers frequently feel over-whelmed and frustrated with the adverse effects of AE drugs on the Quality of Life for their K9 companion–many choosing euthanasia as the last-ditch alternative.

But new research on an ancient botanical medicine is encouraging and may be the answer for pet parents of dogs afflicted with epilepsy.

A Natural Treatment Alternative for Dogs with Epilepsy

Although the correct determination of an appropriate treatment regimen for canine epilepsy depends on an accurate diagnosis of the type and cause of seizures (epileptogenic), there is a canine epilepsy treatment option available for dog owners who want a more natural, holistic means to help calm their dog’s seizures.

CBD Oil for Dogs with Epilepsy

Research on the potential health benefits of CBD in dogs is beginning to emerge. Current research suggests that Cannabidiol (CBD) from hemp has low toxicity and high tolerability in humans and non-humans and shows promise in the attenuation of seizure activity in dogs.

A major clinical trial to study the use of cannabidiol to treat drug resistant epilepsy in dogs was led by Stephanie McGrath, MS, DVM, DACVIM (Neurology), at Colorado State University’s College of Veterinary Medicine and Biomedical Sciences.

Known as the “Efficacy of Cannabidiol (CBD) for the Treatment of Canine Epilepsy”, Dr. McGrath intended to determine if CBD is effective for treating epilepsy in dogs and measure the potential adverse side-effects of CBD as an anti-convulsive medication.

She studied 16 dogs with greater than 2 seizures a month and found that using a full-spectrum CBD extract in a carrier oil of MCT oil showed positive clinical results with a statistically significant reduction in the FREQUENCY of canine seizures.

In addition to the study’s positive conclusions of using CBD to treat canine epilepsy, there were ‘zero adverse side effects’ from CBD therapy–even when combining CBD and anti-convulsive therapy drugs like Keppra for the management of canine epilepsy.

This randomized, blinded, placebo-controlled study provided some evidence that CBD might be useful in refractory epilepsy in dogs with the major outcome being a change in the monthly seizure FREQUENCY (a decrease from 4.0 to 2.7 on average).

What is interesting from this university-based study was that canine participants that were currently on AE meds (Keppra) were still positively impacted by the addition of full spectrum CBD oil with no adverse reactions–indicating the use of BOTH conventional treatments AND natural CBD is effective in reducing the FREQUENCY (and to a lesser extent, the INTENSITY) of seizures in dogs.

When combined with a reported absence of negative side-effects, the current evidence strongly supports CBD as a therapeutic candidate for a diverse range of epilepsies in our four-legged friends.

How to Prevent Seizures in Older Dogs

Some causes for seizures in old dogs are unknown and cannot be prevented, but others can–

By keeping household cleaners & toxic chemicals like lawn fertilizers, unnecessary medications or drugs and other home items like scented candles that can cause seizures out of reach of your old dog you are reducing the possibility of seizures. Be aware of the association and negative impact that flea collars and insecticide powders can have on your dog’s neurological system.

Also, make sure your old dog doesn’t get overheated when spending time outside or in a vehicle.

While total eradication of seizures may not be an attainable goal, a significant decrease in seizure frequency, severity and duration may be considered a success for many pet parents.

Adjusting your expectation for a more positive outcome rather than a complete cure is a more realistic first step to give your older dog with seizures the Best Life Possible!