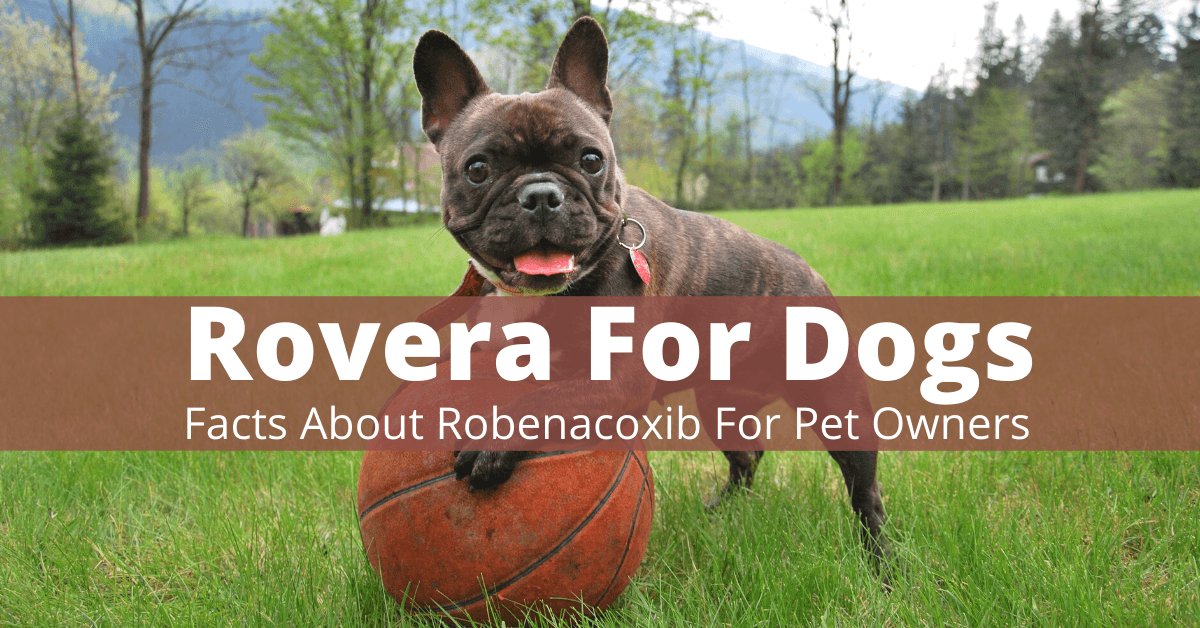 Dogs are living longer and healthier lives today thanks to advances in veterinary medicine and the introduction of effective natural pet care home remedies.

With more active lifestyles that extend into advanced ages, dogs are often diagnosed with painful age-related mobility issues such as osteoarthritis or undergo surgical procedures that require postoperative pain medications.

In these cases, NSAIDs (non-steroidal anti-inflammatory) like Rovera (Robenacoxib) are among the most common analgesics prescribed by veterinarians.

Table of Contents hide
What Is Rovera for Dogs?
How Does Rovera Work?
Are There Adverse Effects from Robenacoxib?
Rovera For Dogs Side Effects
Categories Of Abnormal Health Observations In Dogs Taking Rovera:
What Are the Contraindications of Rovera for Dogs
How Is Rovera (Robenacoxib) Administered
Consumer Choices for Prescription NSAIDs

What Is Rovera for Dogs?

Currently, NSAIDs are the first line and mainstay treatment by veterinarians for the pain and inflammation that accompany musculoskeletal disease dogs.

Rovera (Robenacoxib) is a non-steroidal anti-inflammatory drug available for canine use for the control of pain and inflammation marketed as Onsior.

Onsior tablets for dogs were first approved in Europe for chronic osteoarthritis in 2008, and more recently in the United States in 2016 for the control of postoperative pain and inflammation associated with soft tissue surgery.

Rovera (Carprofen) is the nonproprietary designation) is a NSAID in the same class as ibuprofen, naproxen, and ketoprofen.

Rovera is often used before and after surgical procedures to control the pain and inflammation caused by orthopedic and soft tissue surgeries such as spays and neuters in dogs because robenacoxib targets inflamed tissues.

Rovera is also indicated in dogs for the relief of chronic joint pain and inflammation associated with canine osteoarthritis (OA).

How Does Rovera Work?

Like other drugs in this class, Rovera (robenacoxib) has analgesic and anti-inflammatory effects by inhibiting the synthesis of prostaglandins. The mechanism of action of Rovera (carprofen) is believed to be associated with the inhibition of cyclooxygenase (COX) activity.

Two unique cyclooxygenases have been described in mammals–the ‘constitutive’ COX-1 enzyme and the ‘inducible’ COX-2 enzyme.

The COX-1 enzyme is primarily responsible for synthesis of prostaglandins important for maintaining a healthy gastrointestinal tract, kidney function, platelet function, and other normal functions.

While the COX-2 enzyme is responsible for synthesizing prostaglandins that are important mediators of pain, inflammation, and fever. The enzyme inhibited by NSAIDs like Rovera is the cyclooxygenase (COX-2) enzyme.

Despite its rapid clearance from the blood, Robenacoxib attains peak concentrations and persists longer in inflammatory exudate due to the acidic moiety in its structure and consequent high affinity for plasma proteins that carry the drug to sites of inflammation. This explains the longer efficacy after a single dose of robenacoxib.

Are There Adverse Effects from Robenacoxib?

Rovera, like other drugs of its class, is not free from adverse reactions.

Owners should be advised of the potential for adverse reactions and be informed of the clinical signs associated with drug intolerance.

Adverse reactions may include decreased appetite, vomiting, diarrhea, dark or tarry stools, increased water consumption, increased urination, pale gums due to anemia, yellowing of gums, skin or white of the eye due to jaundice, lethargy, incoordination, seizure, or behavioral changes.

While this moderate-acting medication should stop working in a few days, there can be longer lasting effects in pets with liver or kidney disease.

Most pets will do well with robenacoxib, but dogs that are hypersensitive to it or other NSAIDs could experience side effects including anorexia (lack of appetite), lethargy, depression, vomiting, diarrhea, kidney disease, and kidney failure.

In some cases, serious adverse reactions associated with this drug class can occur without warning and in rare situations result in death.

Dog owners need to be aware of the side effects and should discontinue Rovera therapy and contact their veterinarian immediately if signs of intolerance are observed.

Rovera For Dogs Side Effects

As a class, cyclooxygenase inhibitory NSAIDs may be associated with gastrointestinal, renal and hepatic toxicity. Bleeding or infection at the post-surgical incision site is also a possible adverse reaction.

Adverse effects may result from decreased prostaglandin production and inhibition of the enzyme cyclooxygenase which is responsible for the formation of prostaglandins from arachidonic acid.

When NSAIDs inhibit prostaglandins that cause inflammation they may also inhibit those prostaglandins which maintain normal homeostatic function. These ‘anti-prostaglandin effects’ may result in clinically significant disease in animal patients with underlying or pre-existing disease more often than in healthy patients.

In some instances, a dog may experience multiple combinations of preceding abnormal events. In rare situations, death has been associated with some of the adverse reactions listed above.

Many reactions due to NSAIDs may be lessened if owners are aware of potential side effects, and with appropriate use many can be minimized or avoided.

First and foremost, if an owner suspects a reaction to an NSAID, the owner should stop administering the drug immediately and should contact a veterinarian. Some reactions are mild and go away after stopping the drug.

What Are the Contraindications of Rovera for Dogs

Robenacoxib should not be used in patients that are dehydrated, on diuretic therapy, or have existing renal, heart disease, or liver disease.

Blood work should be performed by your veterinarian prior to starting this medication to check for these risk factors.

How Is Rovera (Robenacoxib) Administered

Robenacoxib is available both as an injection and oral tablets. The injection is administered by your veterinarian at the hospital, and the tablets are given at home by mouth, with or without food.

The tablets should be given whole and are not designed to be broken. Rovera chewable tablets are scored, and contain 25 mg, 75 mg, or 100 mg of carprofen per tablet. Each tablet size is packaged in bottles containing 30, 60, or 180 tablets.

Selecting the best NSAID for your dog’s situation is important. With clinical advances in animal pain abatement and with so many NSAID choices available, much benefit can be gained from the appropriate and careful use of these drugs.

Just like humans, pain control in response to the use of an NSAID varies between dogs. Because the response to pain medication is individualized, no one NSAID is considered more effective than another, and because every NSAID can cause adverse reactions, including stomach/intestinal ulcers and death, none is considered safer than others.

4 thoughts on “Rovera For Dogs – Facts For Pet Owners”