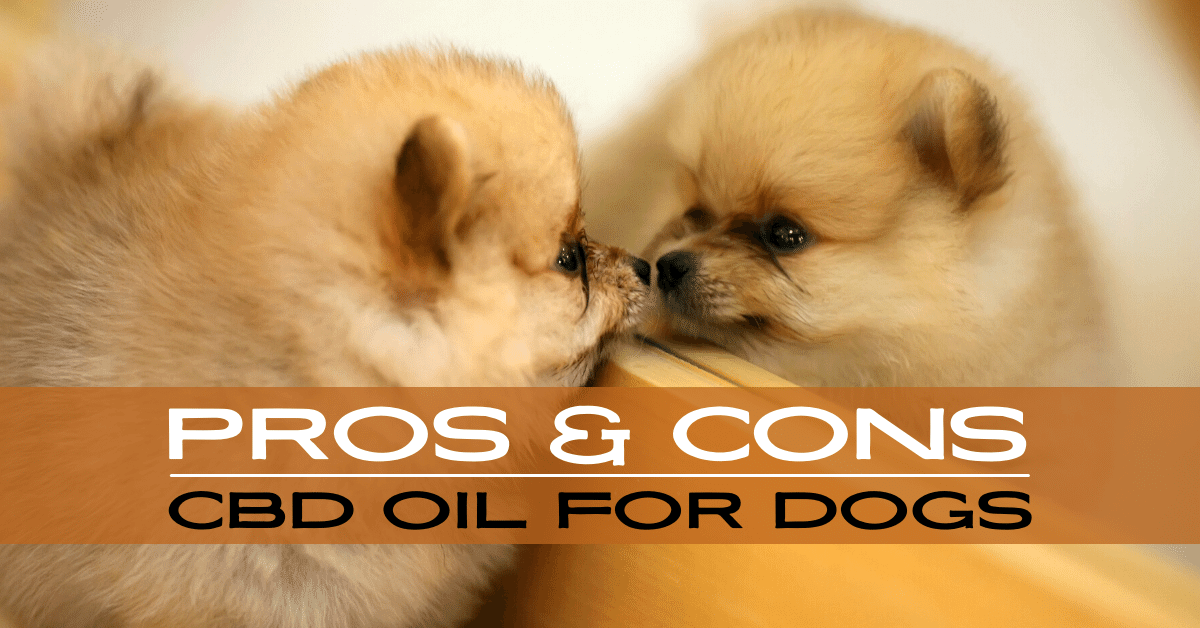 Pros And Cons of CBD Oil for Dogs

In recent years CBD has been explored for potential medical uses with success in both human and veterinary medicine.

A 2019 pet owner survey found that 11% of dog owners gave their pet CBD–the majority in the form of liquid tinctures given under the tongue, with fewer given as dog treats and even less in the form of topical salves & creams.

Reasons cited for giving CBD to companion animals included caring for aging pets and treating conditions such as anxiety, pain, and seizures.

Is CBD Good for Pets?

When people talk about giving CBD to their pets, they are really talking about the use of Cannabidiol (abbreviated CBD) derived from natural hemp. Cannabidiol is one of more than 100 cannabinoids found in the cannabis plant and success stories abound of dogs overcoming behavioral issues, slowing seizures, and even beating cancer due to cannabidiol.

A review of the Pros & Cons of using CBD oil for your dog will provide insight into whether your pup could benefit from the healing properties of this amazing plant.

PRO 1: A Majority of Veterinarians Agree CBD is Safe & Effective

A study published in Frontiers in Veterinary Science found that 82% of veterinarians ‘agreed or strongly agreed’ that there are medicinal uses of CBD products for dogs.

A Veterinary Information Network survey found that 79% of vets with clinical experience using cannabis products said CBD was ‘somewhat or very helpful’ for chronic pain in animals; And over 62% said it was helpful for managing anxiety. And over 80% of those vets said there were no reports of adverse effects aside from mild sedation.

Clinical success has been reported in using CBD to alleviate canine pain and anxiety while also reducing the amount of prescription narcotic drugs by substituting a CBD product with no adverse side effects.

So other than making pets sleepy, CBD oil is 100% safe, there’s no toxicity & your dog cannot overdose on CBD.

The lack of regulation in the CBD marketplace means pet owners could be buying CBD without substantiated levels of CBD or contain unlisted ingredients that are potentially toxic to pets.

Researchers at the University of Pennsylvania found that 70% of the CBD products they analyzed didn’t match the concentration listed on the label, and 21% of their samples contained THC despite it not being on the label.

The US Food and Drug Administration (FDA) has not approved cannabis for any use in animals, and the agency cannot ensure the safety or effectiveness of these products. According to the FDA, animals who ingest cannabis could suffer negative side effects such as lethargy, depression, heavy drooling, vomiting, agitation, tremors, and convulsions.

CBD oil for dogs has been shown to have positive results for canine pain syndromes (osteoarthritis, hip dysplasia, etc.) and reduction in epileptic seizures. A clinical trial found that 89% of dogs who were given CBD oil experienced fewer seizures–indicating CBD as a potential alternative to existing anticonvulsive drugs.

Researchers at Cornell University who performed a double-blind cross-over trial on dogs with osteoarthritis found “a significant decrease in pain and increase in activity” with CBD oil. There were no observed adverse side effects from the CBD treatment.

Medical application of CBD oil for dogs is still in its infancy. So, while there is some clinical evidence to support giving CBD to pets, research in this area is so new no one knows for certain the long-term impact of CBD on companion animals or what a safe & effective dose would be.

At this point, some veterinarians would not recommend CBD for pets until legitimate scientific conclusions can be made and there is a “substantial body of evidence” to support its therapeutic application in specific disease states. Right now, the knowledge about CBD in pets is purely anecdotal based on empirical evidence from pet owners.

Knowledge about CBD use in pets is purely anecdotal at the moment because of the limited scientific evidence available.

To complicate the issue, some purveyors of hemp-based CBD products use lies and deception to sell their brand of CBD. For this reason, the AVMA “cautions” pet owners about the use of such products.

The AVMA says, ‘Pet owners just don’t have enough information at this point to draw any legitimate conclusions. Currently, there is no assurance the CBD oil you purchase contains the actual ingredients with accurate amounts of CBD as stated on the label’.

Pet owners worldwide swear by the use of CBD oil to treat ailments such as separation anxiety, joint pain, digestive issues, allergies and inflammation. Their positive experiences are reflected in the growing market for CBD pet products. The industry was estimated at $400 million in 2019 and could jump to $1.7 billion by 2023.

A study of people who gave their dogs CBD found that less than 5% reported any side effects, and the most common side effect was lethargy (a lack of energy). Much of what we know about therapeutic CBD is specific to humans, and its effects on companion animals could be quite different because they don’t metabolize it the same way.

CBD could also cause dangerous interactions with pharmaceutical drugs prescribed by a veterinarian.

CON 3: Using CBD Instead of Traditional Medicine May Delay Care

Every dog is different, and each will have their own unique experience with CBD therapy. The effects of CBD are subtle, but over time can make a huge difference in the health and longevity of pets.

However, a phenomenon called the “caregiver placebo effect” may cause pet owners to misread their animals’ response to CBD. This might lead to unintended suffering in animals that could have been helped by veterinarian-prescribed medications with scientifically proven effectiveness.

Because owners are so emotionally invested in their pets, they really want to see their pets improve and likely believe the treatment will work–the real risk is even conscientious pet owners may see improvement even when there is limited evidence of actual improvement.

Along with empirical evidence from pet owners, some promising research show CBD oil to be helpful in a number of seemingly different clinical pathologies in dogs.

Arthritis Pain: CBD is often used as an analgesic for dogs because it is known for its painkilling properties. Many people report that their dogs move around with more ease once they begin administering CBD to them for their pains.

Several studies have looked at CBD’s effectiveness against arthritic pain, all with positive results. A Cornell University College of Veterinary Medicine study found dogs given CBD twice daily for a month showed significant improvement in pain relief and quality of life.

Some dogs in the study were initially so decrepit that their owners considered euthanasia–but that after just days on CBD they were trotting around and even climbing stairs.

Allergies / Dermatitis/ Itching: If you have a dog that is prone to high anxiety, CBD may be a great option for you. The reality is, we simply cannot be with our dogs 24/7 so we just aren’t able to be there to comfort them at all times. CBD oil has been found to ease anxiety and calm some of the destructive behaviors that come with canine stress.

An American study found products that combine CBD with another cannabinoid, CBDA, significantly reduced owners’ reports of their dog’s itchiness.

Cancer: Cannabinoids are reported to induce cancer-cell death and prevent metastasis. In a Cornell University study of CBD, dogs, and cancer, researchers found CBD along with a standard chemotherapy drug reduced cancer-cell proliferation in vitro more than the chemotherapy drug alone. Anecdotal reports from veterinarians have claimed CBD shrunk cancer cells or put dogs into remission. Some promising research shows that CBD oil may help fight cancer cells and seizures.

Anxiety Behavior: Anxiety and especially noise reactivity, is a major reason dog owners seek help using CBD. But despite anecdotal reports of its effectiveness, no controlled study so far has shown it to be particularly effective.

A study from the University of Western Australia may show promise for aggressive behavior. Shelter dogs with aggressive tendencies exhibited less aggression toward humans when tested after 15 days of CBD administration.

Seizures: Lots of anecdotal reports hail CBD’s success combatting seizures in dogs, but the single controlled study delivered moderate results. In this Colorado State University study, dogs given CBD for 12 weeks had 33 percent fewer seizures than those given a placebo, but it didn’t work for every dog. These researchers are now working on a larger trial using higher CBD doses.

In addition, CBD’s effect on cytochrome P450 could interfere with prescribed anti-seizure drugs (phenobarbitol), so never use it without your veterinarian’s consent.

Other General Wellness Benefits of CBD Oil for Dogs: If you have an older, senior dog that struggles with digestion problems or lack of appetite, CBD can help increase appetite.

There’s also evidence from laboratory animals that CBD is effective in promoting bone healing, fighting infection, treating inflammatory bowel disease, slowing degenerative myelopathy, quelling nausea, and relieving pain, but these have yet to be specifically examined in dogs.

CON 4: Potential Side Effects of CBD Oil on Dogs

But for all the positive health advantages of CBD oil for dogs listed above, there are also a few potential side effects to be aware of when using it for your dog.

The primary concern with CBD is that it inhibits a chemical in the body called Cytochrome P450 enzyme system that is responsible for metabolizing the majority of prescription and OTC drugs in the liver.

As with most alternative medicines, side effects may arise after using too much CBD oil for your dog. One of those side effects is that your dog might suddenly become less energetic and enthusiastic compared to before giving them CBD oil.

Some of the mild symptoms related to related to CBD users are as follows:

Aside from experiencing lethargy and short-term depression, your dog might also excessively drool, vomit, shake, and become easily agitated after letting them take too much CBD oil.

While all the facts supporting the use of CBD oil for dogs is still being researched, current available evidence indicates that, when given in weight appropriate amounts, CBD is both safe & effective for your furry home companion.

If your dog is suffering from joint pain, skin allergies, behavioral issues like separation anxiety or you simply want to keep your pooch in tip-top condition throughout his life–then talk to your veterinarian about trying CBD for your dog.

CBD oil has shown to have a tremendous upside to many of the negative side effects of prescription medications. With so many beneficial healing properties CBD is a great supplement to give to your dog.

And along with empirical evidence from pet owners–plus some promising university-based research–CBD oil has the potential to help in a number of different systems to allow dogs to live a longer, happier, healthier life.