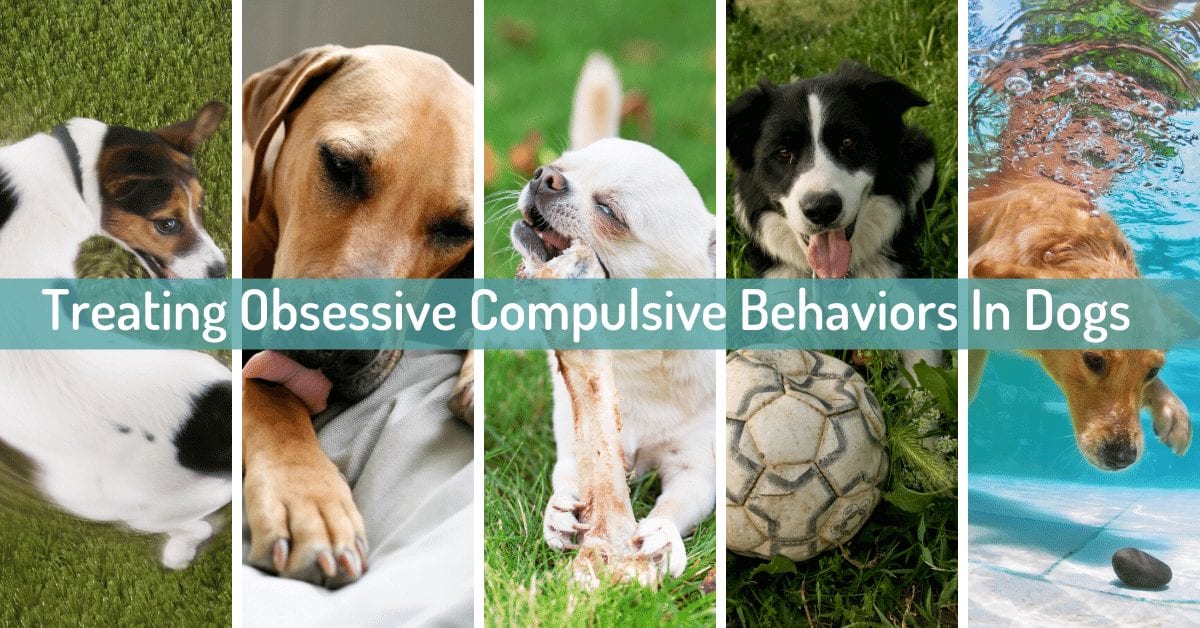 In today’s infectious environment it cannot be overstated the importance of washing your hands!

But when these simple acts of personal hygiene become an overindulgent, unnecessary repetitive action, they are referred to as ‘obsessive-compulsive behaviors’.

Sadly, obsessive-compulsive behaviors are not confined to humans; dogs can have OCD too!

You probably won’t see your dog repetitively washing his paws in the sink, but dogs do have their own set of canine related obsessive-compulsive behaviors. Canine Compulsive Disorder (CCD), the counterpart to human obsessive compulsive disorder (OCD), is just as capable of disrupting a dog’s happy life as OCD is in affecting humans.

What Is OCD In Dogs?

OCD is a psychiatric disorder characterized by obsessive thoughts and repetitious, relatively unchanging sequence of compulsive activities or movements that have no obvious purpose or function.

Although it can be debated whether animals can obsess, they do perceive and experience feelings of concern; therefore, the term ‘canine-compulsive-disorder’ (CCD) has also been adapted to describe this behavioral disorder in dogs.

According to the Merck Veterinary Manual, abnormal repetitive behaviors in dogs may actually comprise a number of different disorders classifications, including compulsive disorders, stereotypies (persistent mechanical repetition of speech or movement), neurologic disorders, and other forms of behavioral pathology.

The best course of action is always to prevent OCD behaviors before they become problematic. If your dog is beginning to show signs of OCD then taking action sooner rather than later can forestall the potential progression into more serious abnormal anxiety-driven, stress related behaviors.

Since much of a dog’s OCD behavior starts as a ‘coping mechanism’ as a way to reduce acute stress, it stands to reason that recognition and care of your dog’s stress level can prevent early adoption of OCD behaviors from developing into more serious (and more difficult to correct) forms of OCD.

All too often, owners mistakenly think their dog’s obsessive behaviors are cute or funny. They reinforce the behavior with laughter and attention, and may even trigger the behavior deliberately, unaware of the harm they’re doing. When the behavior becomes so persistent that it’s annoying, the dog may be reinforced with “negative attention” when the owner yells at him to stop doing it.

Therefore, a critically important element of a successful behavior modification program for OCDs is early detection of these behaviors as well as owner awareness of their own reinforcing behavior.

It’s critically important to identify and modify OCD behavior in its early stages because well-practiced OCD behaviors in dogs are heartbreakingly difficult to modify.

Although OCD behavior in canines is usually derived from their normal ‘maintenance behaviors’ (such as grooming, eating, and walking), if left unchecked, the repetitive behavior can get worse and interfere with your dog’s normal functioning behavior.

Correcting the repetitious behaviors by simply suppressing it through punishment is a dangerously inappropriate approach. Not only does the punishment add stress to a behavior already triggered and exacerbated by stress, it heightens the risk of having the dog transferring the behavior to a new obsessive-compulsive behavior.

A far better approach to an early symptom OCD is to modify the stress-inducing-trigger and help your dog cope and adapt to stress rather than punish the behavior!

If your dog is showing early signs of OCD behavior, take it seriously, and intervene immediately, in order to prevent the behavior from developing into a debilitating disorder.

Early Signs of OCD In Dogs

The problem of obsessive-compulsive behavior in dogs may first arise out of a state of acute mental anxiety.

If your dog perceives a lack of predictability in his daily routine or change in his home environment, such as the loss of its companion owner or moving to a new home, he may resort to abnormal, repetitive behaviors as an adaptive measure to calm his nerves.

A frustrated, conflicted, fearful (or highly aroused) dog can, over time, develop chronic anxiety–and these recurring negative external stressors can be a primary factor in a dog developing compulsive behaviors.

If a dog owner can intervene and teach their dog appropriate acceptable responses (e.g., sitting before greeting or designated play activities as an option to “spinning”) and provide constructive alternatives that engage a dog’s mental ability, the problem can be corrected early and resolved before it progresses into more harmful, repetitive behaviors.

An OCD disorder is considered ‘compulsive’ when it interferes with normal daily functioning OR when it occurs ‘independent from the original inciting stimulus’ (e.g., noise phobia, separation anxiety, etc.).

What’s important about this ‘compulsive’ designation is that at the point that the dog’s behavior occurs outside of or away from the original stimulus, the reaction is likely due to altered serotonin transmission levels in the dog’s brain.

The link to neurotransmitter imbalance in the brain is particularly significant because drugs that work on the serotonin system in the CNS are the mainstay treatment for OCD in humans.

For instance, a dog that compulsively plays fetch is acting out natural, hard-wired predatory behavior. And for the vast majority of dogs, repetitive behaviors like chasing and retrieving a ball for hours is great fun and the perfect way to enjoy together time with their owner.

With canine OCD, it's not what dogs do but the EXTENT to which they do it that matters! Click To Tweet

If a dog wants to engage behaviors seemingly to the exclusion of other, more necessary behaviors, then there may be cause for concern.

The Most Prevalent OCD Behaviors In Dogs:

Is OCD In Dogs Genetic?

Not every dog that shows signs of OCD has the same manifestation characteristics. Each breed exhibits their own particular class of compulsive type behaviors. That being said, certain breeds have a clear genetic propensity for specific OCDs.

Schnauzers, for instance, seem to be prone to ‘hind-end checking’, while German Shepherds and Bull Terriers are known to spin or tail chase. Tail chasing is also disproportionately seen in herding dog breeds.

While there is a known genetic locus identified for Doberman Pinschers to lick their limbs and suck their flank, Labradors tend to hold objects in their mouths or chew stones and King Charles Spaniels are known to snap at imaginary flies.

It’s a good idea to research your own breed thoroughly, so you can be especially watchful for telltale signs of any that may plague your breed.

Given that OCD behaviors are triggered and exacerbated by stress as an extension of normal canine grooming or breed trait behavior, the obvious therapy is to calm your dog’s acute reaction to stress!

And the best place to begin to help your dog with stress (e.g. fireworks, etc.) is with the calming, anti-anxiety effects of Cannabidiol (CBD) found in natural hemp oil.

CBD represents a drug-free way to ease your dog’s anxious behavior & over-accentuated stress response. Giving your dog CBD is believed to have beneficial qualities on the endocannabinoid system (ECS), a system in the dog’s body that regulates various responses such as pain, stress, sleep, memory, mood, appetite and immune function.

For dogs with acute stress-behaviors, CBD can help your dog more easily adapt to changes in his environment and adjust his behavior BEFORE regular habits become full blown obsessive-compulsive behaviors.