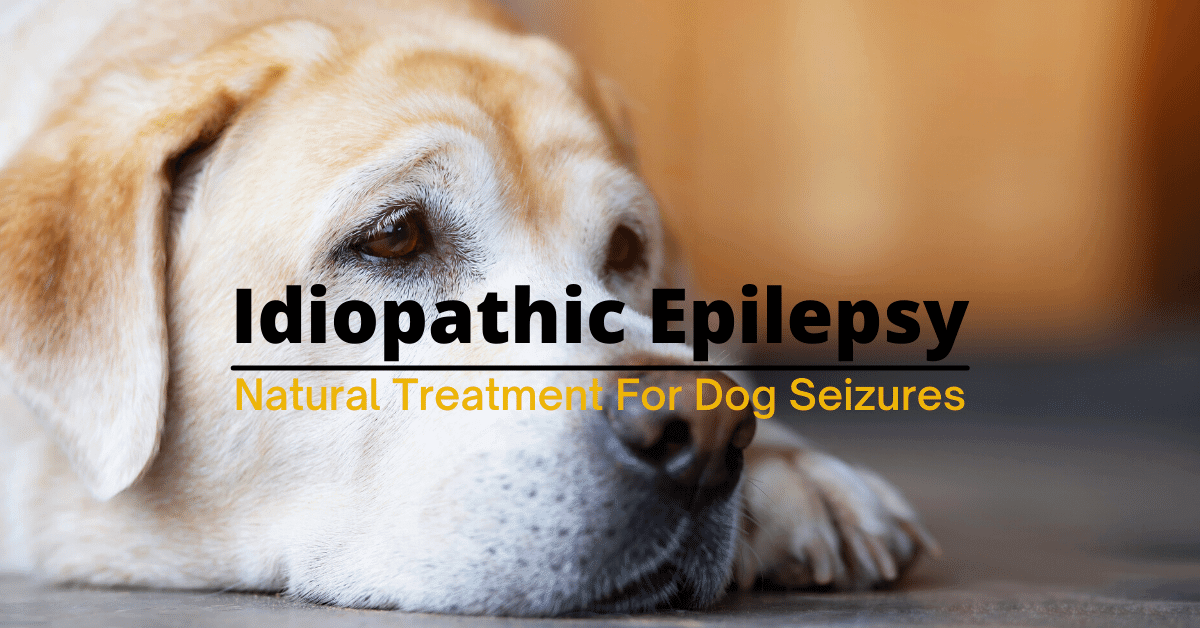 What Is Idiopathic Epilepsy in Dogs?

The term idiopathic means a ‘disease of unknown cause’, indicating the vast majority of canine seizures have no identifiable source of origination–which makes intervention and care more difficult for medical professional and pet parents looking for effective treatment.

Idiopathic epilepsy (IE) is diagnosed in about 5% of the canine population, yet it is still the most common neurologic disorder diagnosed in dogs. Although any dog can have a seizure, idiopathic epilepsy is more common in Border Collies, Australian shepherds, Labrador Retrievers, Beagles, Belgian Tervuren and German Shepherds.

The onset of seizures for dogs with IE typically occurs between the ages of 6 months and 6 years of age. Dogs outside of this age range are more likely to have an underlying cause for their seizures, a condition referred to as Secondary Epilepsy.

Types Of Idiopathic Epilepsy in Dogs

Clinical signs of seizures in dogs with epilepsy can be either generalized or focal (partial) in onset.

Although seizures may start as focal and then become generalized, it is not true that all idiopathic epileptics will have generalized seizures from the onset.

General type of seizures seems to be more common than partial seizures (where animals may remain alert) but not all dogs progress from one type to the other.

Be aware that many sudden-onset-events may be falsely identified as focal seizures. It is important to identify your dog’s behavior changes such as nausea, attention seeking, difficulty seeing or avoidance hiding that may occur just before or immediately following a suspected seizure.

A dog with IE should be “completely normal” in between seizure episodes. However, multiple seizures in a day or a seizure lasting longer than five minutes is a medical emergency!

Symptoms Of Idiopathic Seizures in Dogs

Signs of seizures in dogs can vary but can look like an uncontrollable twitch or shaking that can last from less than a minute to several minutes. Some dogs simply stare off into space before a seizure.

Common symptoms of seizures can include:

Dogs can fall to the side and make paddling “swimming” motions with their legs & they sometimes poop or pee during the seizure episode.

The severity of seizures may worsen over time. Sometimes the seizures may last for more than five minutes (status) or occur one after another within a short time period (cluster). Both situations require immediate management by a primary care veterinarian.

It’s important to note that a dog with epilepsy is “neurologically normal” in between the seizure episodes.

What Causes Idiopathic Seizures in Dogs?

Idiopathic Epilepsy (IE) in dogs most likely has an underlying genetic cause. In spite of strong evidence for a genetic component, the association of specific genetic variants with epilepsy in most breeds has remained elusive.

The prevalence of epilepsy is significantly greater in purebred dogs versus mixed breed dogs and male dogs are more commonly affected than females.

How To Treat Dog with Seizures

Presently, there is no cure for Idiopathic Epilepsy in dogs and the course of treatment is highly individual. It’s unrealistic to expect to completely eliminate all seizure activity, but with anticonvulsive medications and a newly discovered natural plant-based therapy–CBD from hemp oil–the severity and frequency of seizures can be reduced.

The decision to start antiepileptic drug treatment is based on a number of factors, including the cause of the seizures, risk of recurrence, seizure type and side effects of the medication.

According to veterinarian guidelines, a general rule is: two or more seizures within an eight-week period OR seizures lasting longer than five minutes require initiating some form of medication.

In dogs, long-term seizure management is most successful if therapy is initiated early after onset of seizures, especially in dogs with frequent seizures and in dog breeds known to have severe epilepsy.

The most commonly used medications to treat IE are phenobarbital, potassium bromide (KBr), Zonisamide, and Levetiracetam. Another anti-convulsant, Gabapentin, is approved for the treatment of focal seizures, however, it is not effective for generalized epilepsy.

So, there are advantages and disadvantages with each medication, and these should be discussed with the veterinarian overseeing your dog’s treatment.

Just know that more than 80% of dogs will require at least one of these medications in order to have a significant reduction in their seizure activity, while others may require several. Of note, even with these medications, success is limited, and some dogs may still experience uncontrolled seizures.

In principle, administration of a single drug is preferred because it avoids drug interactions, and it is more convenient for the pet owner.

Phenobarbital and potassium bromide have been used as first-choice sole drugs for long-term treatment of epilepsy in dogs based on their long-standing history, widespread availability and relatively low cost.

However, more recently, a newer effective natural antiepileptic (with fewer side effects and drug interactions) has been tested for treatment of K9 epilepsy.

Numerous studies have provided evidence to prove that CBD (Cannabidiol) has beneficial therapeutic effects when it comes to idiopathic epilepsy and curtailing seizure activity.

Studies have also shown that CBD provides unique advantages when it comes to relieving canine epilepsy and seizures when compared to the currently available prescription anticonvulsants. According to research, CBD shows not only anticonvulsant activity, but it also limits seizure duration presumably through the activation of CB1 receptors in the canine Endocannabinoid System.

One study undertaken in the neurology department at Colorado State University measured the ability of a full-spectrum CBD product to reduce the frequency and severity of breakthrough seizures in the canine epilepsy patient with an idiopathic, treatment-resistant form of the disease. Results showed some improvement with CBD in these difficult-to-treat K9 patients.

The study reported an improvement (not an elimination) in about two-thirds of the subjects when treated with a dose of full spectrum CBD oil twice a day.

The researchers are repeating the study, now funded by the AKC Canine Health Foundation, with a higher dose twice a day to see if that can further reduce the incidence of breakthrough seizures in dogs who are already on strong anti-convulsant drugs.

While ALL drugs have inherent side-effects, CBD from natural hemp has minimal side effects when used to relieve epilepsy and seizures than currently approved drug treatments for these same conditions.

This makes hemp derived CBD a better therapeutic aid than current conventional seizure medications and certainly worth serious consideration if not as a sole treatment, then at least as adjunctive care used along with traditional seizure control medications!

If you’ve tried several traditional ways to help a dog with seizures and haven’t seen the success you hoped for, perhaps choosing a more holistic approach using CBD therapy (in combination with traditional AE’s) may be a better answer.

Seizure frequency and severity can greatly impact the Quality of Life of a dog with epilepsy. About 60-70 percent of epileptic dogs achieve ‘good seizure control’ when their therapy is carefully monitored. If seizure activity can be reduced with natural medication and that therapy is well-tolerated, the prognosis for a long life is generally very good.

However, approximately 40-60 percent of dogs with epilepsy have one or more episodes of cluster seizures or status epilepsy, and these dogs unfortunately have a mean lifespan of only 8 years (compared to 11 years for those with epilepsy without status epilepsy). Epileptic dogs that have had cluster seizures are known to be significantly less likely to achieve remission with any form of treatment.

Though life expectancy of the pet may not be affected, the odds of an epileptic going into complete remission and not requiring ongoing therapy are very low: 6-8 percent in dogs. Thus, dogs with epilepsy usually require lifelong therapy and commitment from the pet owner. A balance between quality of life and therapeutic success is often key for an owner’s commitment to their pet’s therapy.

Pet Care Is More Than Drugs or Droppers

Canine idiopathic epilepsy, a neurological disorder characterized by sudden, recurrent episodes of sensory disturbances that has no known or identifiable underlying cause, remains a common concern of dog owners and veterinary professionals.

New interest in effective natural treatment for seizures has led to university-based research on hemp derived CBD oil for dogs with epilepsy. The scope of the study at CSU proved the efficacy of plant-based, full-spectrum cannabinoid therapy for dogs with uncontrolled epilepsy. These results extend the anti-convulsant profile of CBD to help dogs with a range of neurological disorders.

Indeed, while dogs with idiopathic epilepsy can gain significant benefits from using CBD-rich hemp oil to decrease–or potentially prevent–more severe seizure incidences, the take-away message for those dog owners who are considering using this natural plant-based therapy as an alternative treatment for their dog with epilepsy is: every dog will have their own unique reaction to CBD, but full spectrum hemp oil should be considered a worthwhile holistic method to help your dog with seizures & give your dog the Best Life Possible.