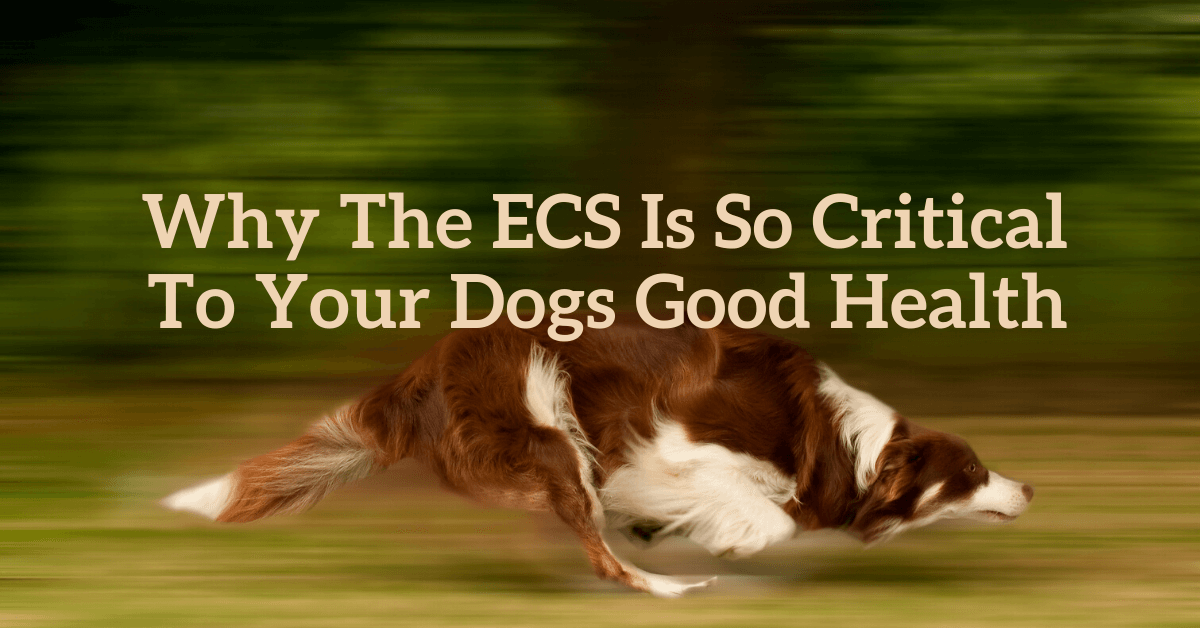 The Endocannabinoid System (ECS) is present in all animals (except insects) and functions as the ‘master communication’ control center for life-sustaining HOMEOSTASIS.

The endocannabinoid system in your dog’s body helps to regulate a broad range of biological functions that maintain a healthy internal balance of all major body systems; including regulate sleep & appetite, modulate inflammation and even transform pain perception.

The importance of the ECS to control and regulate basic life functions that maintain overall canine health & wellness cannot be overstated!

A notable aspect of the ECS is that, by way of cannabinoid receptors present throughout your dog’s body and brain, you can influence (up-regulate) the ECS by external Phyto cannabinoids (plant-based cannabinoids) such as CBD (cannabidiol) harvested from in the Cannabis Sativa hemp plant.

Although the ECS communicates using its own naturally produced endocannabinoids, there are numerous clinical studies confirming the beneficial interaction between the canine ECS and non-psychoactive CBD to help dogs with arthritis, anxiety, allergies, cancer and seizures.

Supplementing your dog’s diet with full spectrum Phyto cannabinoids may be an essential component to achieving optimal K9 health.

What Is the Endocannabinoid System in Dogs?

The ECS is one of the most critical systems possessed by all mammals for maintaining optimum health. The endocannabinoid system (ECS) in dogs has recently become the target of scientific research because of its therapeutic potential in treating common K9 disorders–many of which are not adequately addressed with OTC or prescription pharmaceuticals.

While scientists understand the basic structure and function of the ECS, research continues to uncover new exciting therapeutic applications of this system to benefit our canine companions.

The Key to Understanding Cannabinoid Therapy for Dogs

A closer look at the structural components of the Endocannabinoid System can provide insight into how CBD can help alleviate pain and inflammation, reduce tumors, control epileptic seizure activity & provide more comfort and a healthier disposition for older, aging dogs.

What Are The 3 Key Structural Components of the ECS?

Complex as it seems, the internal signaling system of the Canine Endocannabinoid System (cECS) is comprised of three essential components:

Cannabinoid receptors are located on the surface of cells, and they monitor the conditions outside of the cell. Receptors transmit what they detect to the inside of the cell, and that triggers the appropriate cellular response.

Cannabinoids bind with these receptors; think of it like turning the key in your car–once you start the engine, everything powers up. On the same note, once cannabinoids bond to a receptor, certain bodily functions will also shift into gear.

Endogenous cannabinoids are molecules that help ‘activate’ cannabinoid receptors. They are created throughout the body and are the key messengers of the ECS.

Do Dogs Have Cannabinoid Receptors?

There are several types of cannabinoid receptors in the endocannabinoid system in dogs involved in a wide variety of body processes, including nerve growth and development, inflammation, immune function, bone growth, pain, emotions (anxiety), and metabolism.

The precise locations of these receptors in dogs’ bodies are still being investigated, but many locations have already been discovered.

The most important function of the CB1-Receptor is the reduction of excessive or inadequate signaling by the neurotransmitters (chemical messengers) in the brain.

By the activation of the CB1-R, the hyperactivity or hypoactivity of the messengers (e.g., serotonin, dopamine) is regulated back into balance resulting in reduction in symptoms such as nausea, muscle spasticity; and seizures can be alleviated or diminished with cannabinoid therapy effectively controlling CB1 receptor activity.

One of the major differences scientists noticed between the endocannabinoid systems in dogs and humans is that dogs actually have more endocannabinoid receptors in their brain than humans do. This makes dogs more susceptible to the effects of Phyto cannabinoids like THC and CBD.

Too much THC is harmful for a dog and can result in Ataxia--a condition with potentially life-threatening consequences. The good news is that full spectrum hemp oil products contain less than 0.3% THC – which render it non-psychoactive and not harmful to give your dog.

In healthy dogs, CB2 type receptors are found in the peripheral body & organs and are primarily associated with the immune system.

CB2-Receptors are found outside of the CNS in such places as the gut, spleen, liver, heart, kidneys, bones, blood vessels, lymph cells, endocrine glands and reproductive organs.

An example of just how much CBD (cannabidiol) is keyed to CB2-Receptors, evidence shows low-to-moderate doses of CBD over time is a beneficial therapeutic strategy to lessen the impact of inflammatory and neuro-inflammatory diseases usually associated with pain & swelling in the extremities.

Because CBD is keyed to CB2-Receptors there’s good evidence showing CBD is a potent beneficial therapeutic strategy to lessen the impact of inflammation (eg. canine arthritis) and neuro-inflammatory diseases in dogs.

A third receptor that gets little attention is the transient receptor potential vanilloid-type one (TRPV1). The function of TRPV1 receptor is to detect and regulate body temperature.

In addition, TRPV1 is responsible for the sensations of extreme external heat and pain and is subject to desensitization. Therefore, if continuously stimulated, the pathway will eventually slow down or even stop.

The ECS is the Master Regulator of Your Dog’s Health

The role of the ECS is to monitor and communicate adjustments to bring the dog’s body back into normal balance (e.g. maintain homeostasis).

When something is “out-of-balance” in our pet’s body (e.g. pain & inflammation, anxiety, etc.), their ECS responds by identifying the problem and bringing it back into chemical balance.

But when the ECS is not working properly, and your four-legged friend’s body is no longer in balance, you can start to see a range of negative physical signs like: pain, lethargy, fear, aggression, sleep disturbances, GI Tract problems (vomiting, diarrhea, constipation), excessive panting (even in cool temperatures), or even depression & sad behaviors.

According to researchers, many aberrant conditions (inflammation, anxiety, depression, nerve pain) may be due to a lack of or deficiency of endocannabinoids.

The range of possible canine behaviors related to ‘cannabinoid deficiency’ can be as simple as a lack of energy or willingness to play or as severe as individual organ failure.

In these cases, some pet owners have seen phenomenal results from supplementing their dog’s diet with plant cannabinoids like CBD.

How Does CBD Work with My Dog’s ECS?

All of this scientific information is fine and dandy, but let’s get down to how CBD directly interacts with your dog’s ECS to affect their health.

To start, the cannabinoids present in CBD oil mimic your pet’s own endocannabinoids. So, introducing cannabinoids into your dog’s body will put the ECS directly into drive mode and begin influencing a myriad of complex metabolic processes that balance and maintain normal HOMEOSTASIS.

Once a dog ingests any CBD or cannabis product, the ECS receptors will begin working to process these compounds throughout the body and send chemical messages to the nerve cells requiring assistance.

When a specific cannabinoid or combination of cannabinoids bind to a specialized receptor, an event or a series of events, is triggered in the cell, resulting in a change in the cell’s activity, its gene regulation and/or the signals that it sends to neighboring cells. This process is called “signal transduction.”

The result? Once CBD receptors are ‘activated’, the communication between cells of an imbalanced function is corrected and the body is put back into balance.

Much like the human body, your dog’s body is uniquely designed with purposeful structure & function with the capacity of the ECS to communicate between whole body systems to correct and even prevent disease progression.

If your dog is suffering from arthritis and inflamed joints, then CBD can help boost the receptors (specifically CB2 receptors in this case) and in turn, the ECS’s role in regulating that inflammatory response. As a result, your dog will experience a reduction in joint pain and inflammation.

While more clinical research and testimonials are being released attesting to CBD’s therapeutic effects in a number of health issues that dogs face, what is undisputed is the critical importance the canine endocannabinoid system plays in various processes and functions that maintain life-sustaining HOMEOSTASIS.

When the ECS needs support pet parents now understand how CBD-rich, full spectrum hemp oil can potentially provide relief from certain health ailments and give their dogs a better Quality of Life.