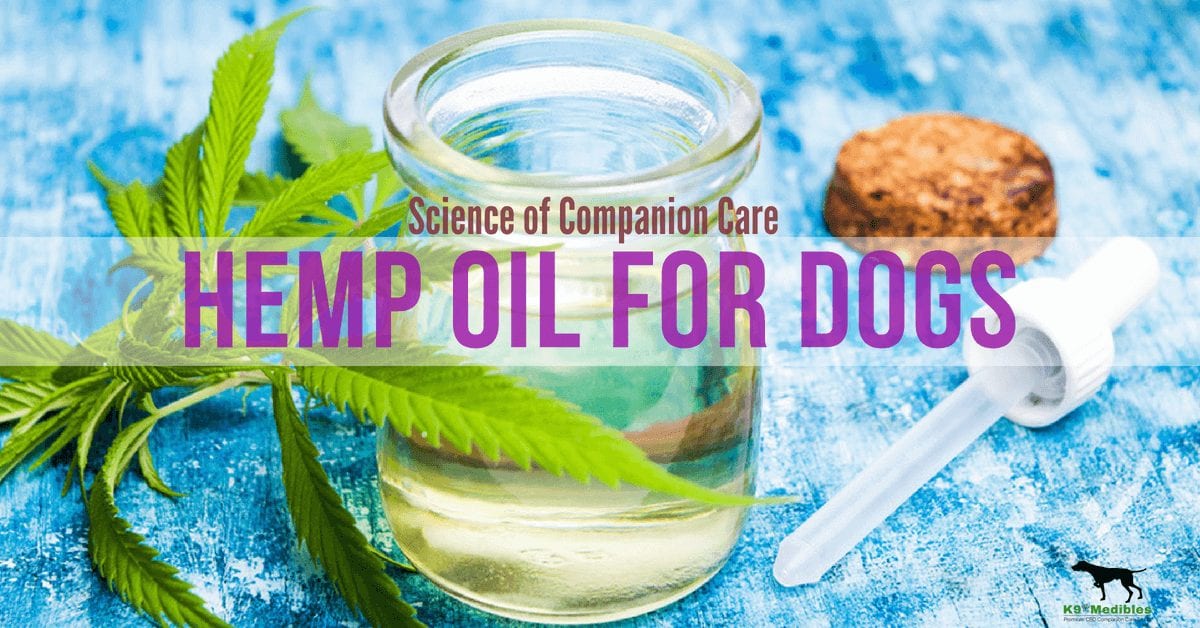 Given the expanding interest in both medical and recreational cannabis to effectively treat human diseases, it’s not surprising that this interest has expanded to include consideration of hemp oils’ potential health benefits for our companion animals as well.

Dog lovers everywhere, particularly those looking for a natural remedy for their pet’s pain, anxiety or seizures, will appreciate the growing scientific evidence for using full spectrum CBD from hemp to temper many canine medical conditions and help support healthy, graceful aging of their cherished companions.

However, just as in human medicine, there is little research-based information available to provide analysis and specific guidance for the use of medical cannabis and hemp oil extracts for our family pets.

Lacking this rigorous scientific evidence, pet owners are left to rely on either company product claims or anecdotal evidence from the trial & error efforts of other dog owners who are also seeking a more natural cure for their beloved family pet.

CBD is a prominent naturally occurring cannabinoid compound that has potentially significant benefits for our canine companions. The main difference between hemp and marijuana (cannabis) lies in the ratio of THC to CBD that the plant contains. By definition, industrial hemp contains high levels of CBD and less than 0.3 percent THC on a dry-matter basis.

By comparison, tests of some modern strains of marijuana reveal levels of more than 20 percent THC and much lower levels of CBD.

While some will differentiate THC as “psychoactive” and CBD as “non-psychoactive”, CBD confers both psychotropic and neuroprotective effects, but without the typical “high” associated with THC. Hemp-derived CBD oil offers a host of health benefits for dogs, including improved stress response, better sleep, and reduced inflammation in the body–making it a powerful supplement for overall canine wellness.

Through a combination of unique cultivation techniques, advanced plant genetics, and cutting-edge growing techniques, an exceptionally high percentage of CBD can be produced naturally and consistently from the hemp plant with only negligible amounts of THC – so it is safe and legal for canine consumption.

Benefits Of Hemp Oil For Dogs

Cannabidiol (CBD) has been proven to help with inflammation, pain, anxiety, psychotic behaviors, seizures and spasms, without any side effects.

Scientific and clinical studies highlight CBD oil as a potential treatment choice for a wide range of canine conditions, including arthritis, diabetes, antibiotic-resistant infections, epilepsy, and other neurological disorders.

CBD for dogs has demonstrated neuro-protective and neurogenic effects, and its anti-cancer properties are currently being investigated at several academic research centers in the United States and elsewhere.

CBD oil drops can be amazingly helpful as an anti-inflammatory for dogs with age-related joint pain. Hemp oil and its primary constituent, Cannabidiol (CBD), have demonstrated nutritional potential for years, yet the taboo around cannabis (primarily because of the psychoactive effects of THC) has, until recently, kept the veterinarian application of CBD oil off the proverbial radar.

Is Hemp Oil Safe for Dogs?

According to studies, CBD and other Phyto cannabinoids influence the brain by interacting with the brain’s very own cannabinoids, called endocannabinoids.

Generally speaking, Phyto cannabinoids like CBD can help to restore a more balanced ‘tone’ within the endocannabinoid system.

Hemp Oil for Dogs with Arthritis

CBD oil is effective in treating inflammation–the root cause of many chronic and debilitating joint diseases like canine osteoarthritis.

Although every dog is different and they will each have their own unique reaction, CBD-derived hemp oil can increase the comfort and activity for the majority of aging senior dogs–many of whom show overt signs of pain relief with small, incremental doses.

Hemp Oil for Dogs with Anxiety

CBD can be a great therapeutic aid for calming a variety of separation anxiety disorders. CBD oil drops are an effective treatment alternative to the currently available pharmaceuticals, especially when starting at low doses and working one’s way up to using higher amounts.

Numerous studies and an accumulating body of evidence from clinical experiments show that CBD oil has strong anxiolytic (anti-anxiety) properties and is well-tolerated by dogs with symptoms of severe separation anxiety or noise-phobia disorders.

Hemp Oil for Seizures in Dogs

Scientists are now discovering what dog owners have been saying–using hemp oil CBD along with other anti-epileptic medications (AE) has reduced the number and frequency of seizure episodes & diminished the impact in the aftermath of a seizures in their pets.

Numerous studies have provided evidence to prove that CBD oil has therapeutic effects when it comes to relieving epilepsy and seizures.

Studies have also shown that CBD provides unique advantages when it comes to relieving epilepsy and seizures compared to the currently available prescription anticonvulsants. Click To Tweet

Although all medications have inherent side-effects, CBD oil has minimal side effects when used to relieve canine epilepsy and reduce the impact of seizures than currently approved medications. This makes CBD from hemp oil a better therapeutic aid–and possible prevention–than conventional prescription anti epilepsy drugs.

Within the scientific community, the discovery that cannabinoids have anti-tumoral properties is increasingly recognized as a fundamental advancement in veterinary cancer therapeutics.

While therapy options for canine cancer still include the traditional invasive style interventions like surgery, radiation therapy and chemotherapy, there is an ever-growing interest in the use of hemp oil extracts as a clinical alternative for many canine lymphomas.

There is mounting evidence that cannabinoids (THC and CBD) may represent a new class of anticancer drugs that retard cancer growth, inhibit angiogenesis (the formation of new blood cells that feed a tumor) and stall the metastatic spreading of cancer cells.

Beyond simply helping with the nausea and loss of appetite of chemotherapy, there is strong scientific evidence of a deeper benefit of using hemp oil extracts alongside conventional therapies. Research shows that cannabidiol (CBD), a potent anti-tumoral compound in its own right, acts synergistically with various anti-cancer pharmaceuticals, enhancing their impact while cutting the toxic dosage necessary for maximum effect.

According to published literature, CBD oil affects many canine biological pathways through the Endocannabinoid System (ECS) and functions to optimize cellular interactions involved in the repair and restoration of whole-body systems to maintain normal homeostasis. In particular, CBD oil can provide relief for dog allergies.

Since allergic skin reactions or “Hot-Spots” are produced by your pet’s immune system, CBD oil seems to work by modulating this cellular inflammatory response. In particular, CBD acts as a neuro-immune modulator, or signaling molecule, for communication between cellular structures, tissues and organ systems specifically involved with inflammation and allergic responses.

Cannabidiol curbs inflammation by suppressing the infiltration and functional activity of T-cells and macrophages in the inflammatory site; thereby preventing the cascade of cellular immune response that result in your dog’s sorrowful itching & scratching behavior.

CBD from hemp is, in essence, a food with very beneficial effects on canine health. However, one of the most important factors in realizing a positive outcome from CBD treatment for your dog is to know how to calculate, measure and administer the proper CBD dose for your dog.

A good starting dose is based on your dog’s body weight using a milligram to kilogram (mg/kg) benchmark.

Start with a minimal amount of CBD (0.25 milligrams) per kilogram of canine body weight. This starting CBD measurement should be divided into two (or three) equal portions given throughout the whole day.

After a week, incrementally increase the dose with additional milligrams until you’ve achieved the desired effect for whatever is being treated. Again, track, measure and document the increased amount. Over a period of time start to look for trends in your dog’s responses.

Try to notice nuances towards a change in your dog’s behavior, activity level and in the general quality of life of your dog.

How Often Should You Give a Dog Hemp Oil?

Consistency is what is going to determine the window of opportunity to fully capture the healing benefits of CBD oil for your dog. Since every dog is going to have a different reaction to CBD it’s important to be vigilant in the beginning to measure and document his response.

Remember, CBD oil is more of a ‘dog-specific’ than a ‘disease-specific’ therapy–So Go Low & Go Slow!

Dog lovers everywhere, particularly those looking for a natural remedy for their pet’s pain, anxiety or seizures, will appreciate the growing scientific evidence for using CBD oil from hemp to temper many canine ailments and help support healthy, graceful aging of their cherished companions.

If you’re searching for a natural path towards your dog living a livelier, healthier, more spirited life, then CBD oil from hemp has definitely become the next big thing in canine companion care.

And the best hemp oil for dogs is the all-natural, full spectrum 2-In-1 hemp oil, Canine Support Formula from K9 Medibles. This premium hemp CBD oil is grown in the USA and extracted with zero chemical solvents to help support and enhance your dog’s health so they can reach their true potential.