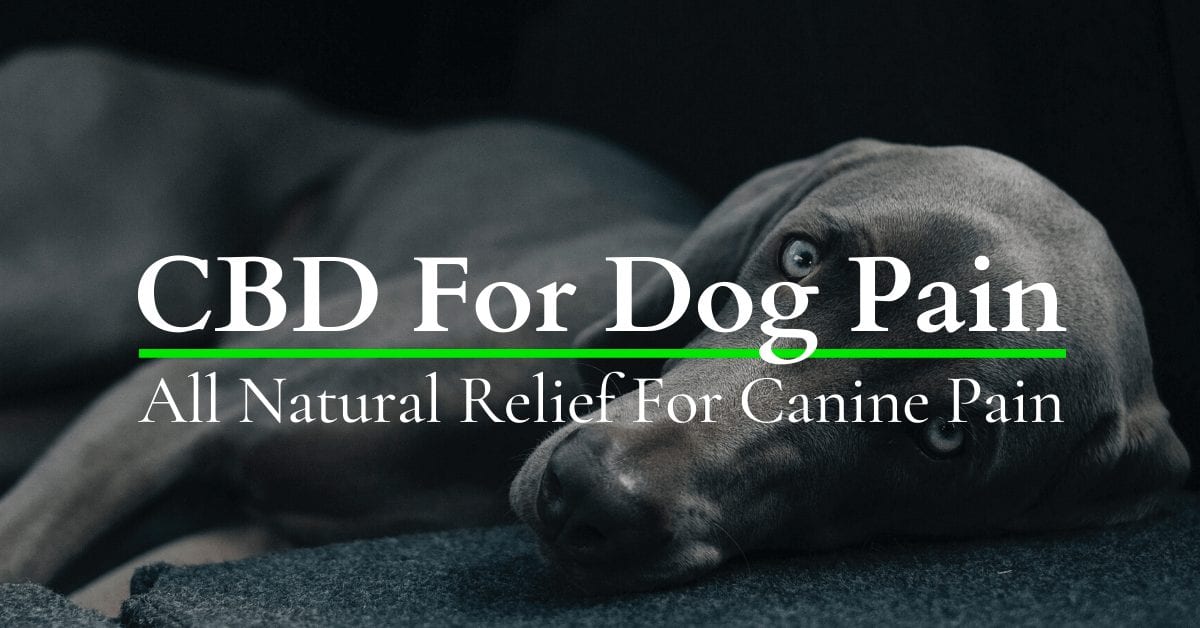 Table of Contents hide
Pain Relief for Dogs
What Can I Give My Dog For Pain?
Natural Pain Relief for Dogs
CBD For Dogs Pain – A Natural Treatment Alternative
CBD For Dogs Joint Pain
CBD For Dogs Arthritis
Dogs Pain Medication
What To Expect with CBD Oil for Dogs Pain
How Do Cannabinoids Work in Pain Modulation?
Neuropathy In Dogs
Hemp CBD Oil for Dogs Pain Relief – What’s The First Step?
Pain Is a Category of Different Responses
Dogs Experiencing Pain Alter Their Behavior in Some Way
Is CBD A Safe Treatment for Dog Pain?
The Future Looks Bright for Natural Medicine!

What Can I Give My Dog For Pain?

It’s not easy living with pain–it’s even more difficult to watch your beloved pet suffer from chronic, debilitating pain.

Whether your dog has arthritis, hip dysplasia or any number of ailments that can cause physical discomfort, finding a dog pain relief solution to help deal with their agony can mean the difference between a playful, active day or a struggle to end a nightmare of unrelenting despair.

Recently, great attention has been directed to the medical properties of Phyto cannabinoids present in the cannabis plant to bring comfort to our beloved four-legged friends. An increasing number of pet owners are using cannabis (hemp) derived products containing CBD (cannabidiol) to help eliminate their animals’ misery and discomfort.

Over the last couple of years, CBD oil for dogs has become a popular form of therapy for pain management. It is currently thought to be so effective, that more and more pet owners are choosing it instead of traditional veterinary prescription drugs. Evidence suggests that cannabis has a much better ‘safety profile’ than prescription pain medications and there is no lethal dose with marijuana.

Meta-data analysis of 25 studies suggest that cannabinoid-based pharmacotherapies may serve as a safe and effective replacement option as an analgesic in pain alleviation.

The major advantages of hemp-derived CBD oil compared to psychoactive THC from cannabis (marijuana) is that it doesn’t cause the “high” feeling and it has no harsh side-effects that come with traditional prescription vet medications.

Following a plethora of empirical evidence proving that hemp CBD for dogs can have an extremely positive impact on overall canine health, Cannabidiol (CBD) is now being used by pet owners worldwide for a variety of specific animal medical conditions–including canine pain relief.

Unfortunately, analytical studies and medical references on the clinical use of cannabinoids in veterinary medicine are still limited, and the application of precise methodologies for determining proper dosage and direct therapeutic effects of cannabinoids in our canine companions remains woefully inadequate.

Anecdotal evidence affirms that full spectrum hemp CBD can have some very beneficial and often curative effects on a variety of serious canine conditions and diseases. Cannabinoids have been suggested as a possible alternative healing option for conditions like chronic neuropathy, canine arthritis, joint inflammation and more optimistically, eliminating the excruciating pain cycle associated with certain types of canine cancers.

There have been extensive scientific, randomized controlled trials showing that cannabis oil extract can effectively treat chronic pain in humans; likely due to it’s action on the CB1 and CB2 receptors in the Endocannabinoid System–which is also integrated into canine anatomy.

Cannabinoid receptors can be thought of as keyholes. And when the cannabinoid comes in, it fits into the receptor like a key and produces an effect on the cell, changing its physiology. CB1 receptors are present mainly in parts of the Central Nervous System (CNS) that affect cognition, appetite, motor activity, emotions, memory but is also found in peripheral tissues including testes, ovaries, prostate, salivary glands; CB2 receptors are found primarily in cells of the immune system in the GI tract as well as epithelial cells in the skin.

Cannabinoids use these receptors as part of an intricate signaling system that regulate function of these cells and have been implicated in easing the pain associated with several chronic neurological disorders.

All of the pharmacological effects of marijuana (cannabis) experienced by humans and inferred to canines work through the action of the Endocannabinoid System (ECS).

Even though there are differences in the receptors and in the metabolism of cannabinoids in dogs compared to humans, the potential value of using CBD as a natural alternative care for canine arthritis and injury cannot be overstated!

What To Expect with CBD Oil for Dogs Pain

Apart from the fact that CBD Oil drops are extremely effective, they are also very easy to give to your dog. You simply place a few drops under your dog’s tongue, and they are instantly absorbed into their system. Hemp CBD extracts can be absorbed within the first few minutes and take full effect within the first hour. When CBD starts to hit your dog’s bloodstream you begin to see a transition towards their normal, healthy state.

Lethargic and tired dogs, who may have aches and pains start to feel looser and limber and start to regain missing energy.

Meanwhile, over-reactive, anxious canines may stop destructive behavior like chewing and clawing furniture, and they may seem calmer and more grounded. It sounds counter-intuitive, but hemp CBD really does help pets on both ends of the spectrum.

How Do Cannabinoids Work in Pain Modulation?

Research has found Cannabinoid receptors (CB1) to be localized into specific centers of the Central Nervous System (CNS) and indicate endocannabinoids play a key role in the transmission and modulation of pain signaling within the spinal cord.

More precisely, activation of CB1 receptors by cannabis extracts suppresses neuronal excitability of cells through control of Calcium and Potassium transduction channels in the CNS.

Early studies performed on canines using simple pin pricks determined cannabinoids are similar in potency and efficacy to that of morphine. However, cannabinoids can also produce profound motor deficits including immobility and catalepsy, so accurate dosing and vigilant observation is imperative.

So not only does hemp CBD function to remove pain through specific actions at the level of the CNS by altering spinal neuron communication but can also alter the pain response threshold in tissues in the periphery by reducing pain sensitivity at the site of an injury or surgical location. This is obviously important in alleviating instances of short-term pain.

However, clinical evidence supports the use of Cannabinoids as a functional long-term analgesic by their effects on altering pain threshold outside of the CNS.

In cases where there was nerve damage (neuropathy) cannabinoids have been found to be superior to opioids in alleviating neuropathic pain. These studies demonstrate that cannabinoids are effective in suppressing pain signals within the brain but also have a direct effect on pain related signaling in the peripheral nerves as well.

Neuroanatomical studies have revealed that cannabinoids are effective for both acute pain transmission at a localized site or injury but also interrupt pain signaling at the level of the brain to alleviate persistent pain modulation in chronic inflammatory disorders like cancer by altering and/or interrupting pain signaling within the brain itself.

Moreover, synergism between cannabinoids and opioid analgesia has also been demonstrated for previously unchecked pain conditions. Collectively, these findings suggest that activation of cannabinoid receptors (and inhibition of deactivating enzymes) may be promising targets for the clinical management of intractable canine pain syndromes.

Pain is very subjective and difficult to measure in canines because dogs instinctively hide their pain to prevent potential predators from targeting them when they are injured.

Pain assessment in our four-legged friends can be challenging and the outward demonstrations of pain will vary widely from dog to dog and from day to day.

Pain Is a Category of Different Responses

It’s important to recognize that just because a dog doesn’t cry, limp, or show other obvious outward signs of pain, that doesn’t mean it isn’t suffering. Although the signs may be subtle, careful observation will often reveal signs of pain in most canines.

Dogs Experiencing Pain Alter Their Behavior in Some Way

A dog may be reluctant to climb stairs, show decreased activity or willingness to play or resist being handled or picked up.

However, short of being handed a medical diagnosis of a pain-related disorder, observing subtle signs or changes in your dog’s normal behavior may be the only clue that they are hurting and in need of pain relief.

Caution is advised when using OTC or prescription medications along with cannabinoids for treating your dog’s pain since there are known and unknown pharmacological interactions with these drugs.

Cannabinoids may offer promise in clinical pain management both on their own and as adjuncts to conventional therapeutic agents; but the problem with combining analgesics with CBD is that the effective dose goes way down because cannabis potentiates the effect of opiate based drugs.

So, although cannabinoid analgesics have generally been well tolerated with no side-effects when given by themselves; combining CBD with other pharmaceuticals may offer untold adverse events. Treatment with hemp derived CBD shows great promise but caution is advised when incorporating other pharmaceutical compounds into a canine pain management protocol.

The last thing you want is your beloved pup suffering, but the desire to soothe your pet’s painful condition can lead to accidental poisoning or unintended drug interactions. Even when given the correct amount some pets may experience adverse reactions to these medical ‘concoctions’.

Is CBD A Safe Treatment for Dog Pain?

Every pet parent wants their dog to live a long and happy life. With advances in veterinary medicine and healthier dietary protocols the probability that your dog will live long enough to experience some form of aches and pains as they age is almost inevitable. Significant medical benefits can now be attributed to hemp CBD oil for dogs.

The analgesic properties of CBD for humans have been recognized for many years–it’s time now to apply that scientific foundation to help our furry friends live a happier, healthier, pain free life–one without deadly side effects.

Moving forward, empirical evidence and reviews from pet parents may still be the best measure of CBD success for alleviating pain in our canine family members. Be observant for subtle signs of pain or discomfort in your dog and if possible, start your dog on a well-documented regimen of hemp CBD oil for natural pain relief.

1 thought on “Pain Relief For Dogs – What Can I Give My Dog For Pain?”