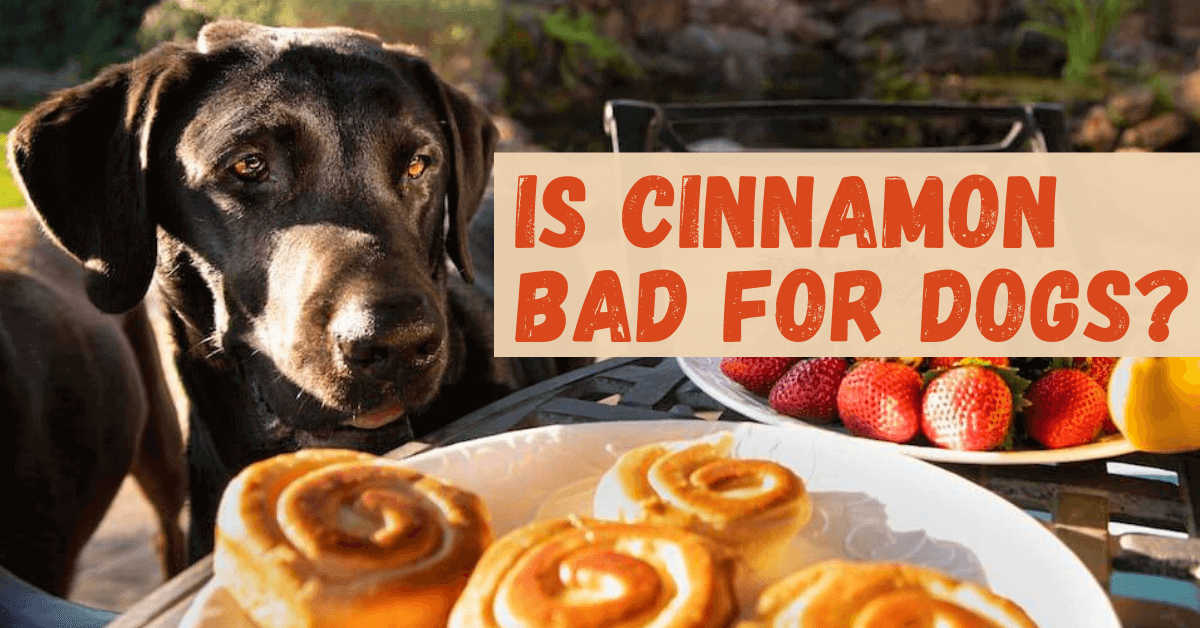 Few spices are as warm & enticing as the aroma of fresh ground cinnamon.

It’s a safe bet that if you’re baking up a delicious treat like pumpkin pie or cinnamon rolls, your dog is nearby waiting to sample the goodies (or catch some wayward crumbs).

But can dogs have cinnamon? Should you be concerned if your pup scarfs down a fresh cinnamon roll or counter-surfed their way to a snickerdoodle cookie cooling on the kitchen counter?

Is Cinnamon Bad for Dogs?

While baked goods like cinnamon rolls or snickerdoodle cookies aren’t the healthiest snack to share with your pet, cinnamon is perfectly safe for your pooch–as long as it’s the right kind of cinnamon.

In the U.S., there are two types of cinnamon widely available: Ceylon cinnamon and Cassia cinnamon.

Ceylon Cinnamon is safe for dogs because it has low levels of coumarin, a natural chemical compound found in many plants. Coumarin is toxic in large doses for both dogs and humans.

Cassia Cinnamon has much higher levels of coumarin than Ceylon Cinnamon, so steer clear of it for your “snack-A-doodle” pup!

Of course, you don’t want to feed your dog table scraps or foods that have a large quantity of cinnamon, since this type of human food may leave your pet with an upset stomach.

A word of warning: many people foods that contain cinnamon also contain nutmeg, which is toxic for dogs. In fact, the Pet Poison Helpline combines these two spices together in making recommendations for their safety message for dogs.

The Pet Poison Helpline message is clear: Cinnamon is safe for dogs in small amounts. Nutmeg is never safe for dogs!

Is Cinnamon Good for Dogs?

As we’ve already seen, the right type of cinnamon is non-toxic to dogs, but this spice also has many positive health benefits for our furry home companions.

Cinnamon is a spice abundant in anti-inflammatory properties, which is great for aging dogs with arthritis or muscle soreness. A sprinkle of powder into your dog’s meal can help manage joint pain and reduce swelling.

So not only does cinnamon add flavor and aroma to spice up your dog’s meals but it also offers a myriad of medicinal benefits.

Health Benefits of Cinnamon for Dogs

Here’s an overview of some of the multitude of health benefits of cinnamon for dogs:

Cinnamon is prized for lowering blood sugar levels by limiting the amount of sugars that enter the bloodstream after eating. It can also improve sensitivity to insulin, all of which helps diabetic dogs struggling with insulin resistance.

If your dog is aging or is getting a bit chubby (which is something you should be trying to monitor all of the time), a pinch of cinnamon in their food can help them fight diabetes by regulating their blood pressure and raising their insulin resistance.

Overweight and diabetic dogs can benefit from cinnamon by adding 1/8 teaspoon of the spice to your dog’s diet for every 15 pounds of their body weight to help regulate their blood sugar and lower insulin resistance. Cinnamon regulates blood sugar by helping to slow the absorption of sugar in the bloodstream after a meal high in carbohydrates.

Dogs have different digestive and internal systems than people, but the next time your dog has an upset stomach or more serious digestive issue, cinnamon could help soothe their side effects, including nausea, heartburn, gas, and vomiting.

In a study published in the Journal of Animal and Veterinary Advances, researchers found that dogs who eat cinnamon had improved heart health. Dogs that participated in the study who were given cinnamon displayed significantly lower systolic blood pressure and heart rate than dogs in the group that were not given cinnamon.

If your dog has arthritis or inflammation that affects their mobility, eating cinnamon can help manage their joint pain and reduce swelling.

5. Cinnamon Is A Potent Antioxidant

Cinnamon is rich in antioxidants such as polyphenols that work to defend dogs against neurological disorders. Studies in mice have shown that consuming cinnamon reduces brain cell damage, protects neurons, and improves motor function. Antioxidants also shield your dog’s body from damage by things like inflammation, pollution, smoke and fumes, and sun exposure.

Cinnamon has potent compounds that can inhibit the growth of bacteria like Listeria and Salmonella and prevent or fight viral infections. If your dog is prone to yeast infections cinnamon can help fight the fungus that causes those infections–many that are resistant to medicine, but not to cinnamon!

While a little bit of cinnamon (like the amount used in most baked cinnamon rolls) is not going to hurt your dog, feeding your doggo baked goods is not necessarily a good idea.

Foods that are high in fat, sugar, and unnecessary calories can lead to obesity, diabetes, and complications such as pancreatitis. Some baked goods may also contain xylitol as a sweetener, which is very toxic to dogs!

If you do choose to feed your dog baked goods with cinnamon, only feed small quantities on a very irregular basis, and make sure they do not contain other ingredients that could be toxic or harmful to your dog, like xylitol, chocolate, macadamia nuts or raisins.

Cinnamon And Dogs – The Spice of Life

Dogs bring such joy and happiness to our homes we want to share everything that pleases us–including the enticing flavor of cinnamon spice.

The good news is, with healthy, dog appropriate amounts, cinnamon comes with health benefits like anti-inflammatory properties that help with canine joint pain and swelling  & can even help older obese dogs regulate blood sugar and raise their insulin sensitivity, among others.

To be safe, you don’t want to feed your dog table scraps or foods that have a large quantity of cinnamon, since this type of people food may have other ingredients that can leave your pet with an upset stomach or worse. Enjoy!